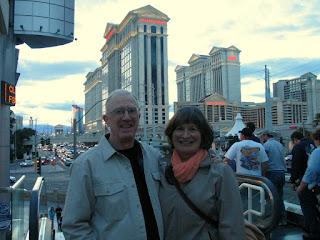 Sleep and a clear blue sky this morning elevated our spirits and cheered us. Mid morning, Dale and Janice picked us up and we drove out to the 'Outlet Mall' just north of town. A lot of looking, a little shopping and lunch before heading back to the Simpson's hotel. We made it back with only enough time to catch the last three minutes of the men's US - Canada Olypmic hockey game ... in the lobby. Three American men watching the TV there went wild when their team scored with just over two minutes left to go. Up in the room we watch the overtime and were thrilled when Canada broke the tie. GOLD! 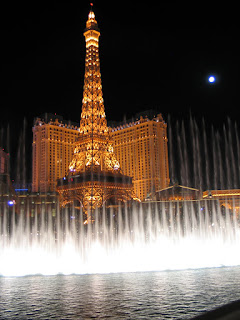 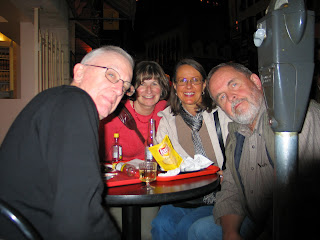 Drove back to our hotel, parked there and caught the shuttle to the strip at 5pm. The sun was going down and the place was writhing with people. Checked out The Paris, had great corned beef sandwiches at a deli in New York, New York. Dazzled ourselves with the Chinese New Year display at the Bellagio and marveled at it's musical fountain with the miniature Eiffel Tower and the full moon as a back drop. Caught The Mirage's volcano going off on our way to The Venetian. Wearing down, we admired the canals and St. Mark's square with it's convincing painted sundown sky. Had a snack before catching a cab back to the Gold Coast at 10pm with aching feet and heads filled with visions of decadence.
Posted by Alice Saltiel-Marshall at 7:43 AM