On Canada Day, last year, we were invited to lunch at the Coutts Homestead.  I was blown away by this piece of paradise hidden in a vast stand of trees on the wide open prairie to the east of Nanton, Alberta.  Yesterday, Linda and I finally got ourselves back there to paint.  The gardens are brimming with native and imported plants, buildings and outdoor art.  It would take years to exhaust the potential paintings this special place inspires. 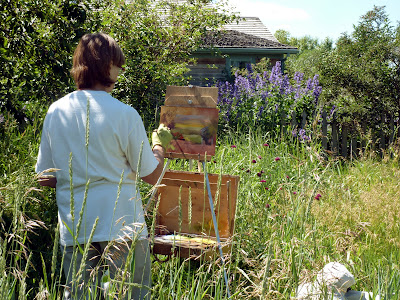 Halting in our tracks, we both gasped as we rounded a bend and caught sight of the extensive poppy garden set against a field of screaming yellow canola.  And crowning it all were the Rockies shimmering in the distance.
﻿
﻿﻿﻿﻿
﻿﻿﻿﻿﻿
While the jury may still be out on the merit of our paintings I know I speak for both of us when I say we were both deeply satisfied and filled with joy for an afternoon so well spent.

Already a well photographed and painted site, in time it will become even further immortalized.  Among the flow of visitors there yesterday we met two other painter gals.  ﻿﻿For the foreseeable future, Jim Coutts will continue to live at the farm but recently he gifted his Grandfather's homestead to the University of Lethbridge.  Below is a link to the story of his bequest as well as another link to an excellent video of Jim himself explaining it.
﻿
﻿ http://www.thisismyu.ca/stories/donor/2011/06/gift-launches-coutts-centre-western-canadian-heritage
http://www.youtube.com/watch?v=j4HO4xOS3nI
Posted by Alice Saltiel-Marshall at 10:00 AM No comments:

Some Have Gone and Some Remain

I must be somewhat of a masochist for insisting on painting portraits even though likenesses elude me at least half the time. What a thrill it was when, with little effort, I nailed Jean's likeness.  Athough I laboured for hours over Marie Claire, she barely looks like herself. I had to put it aside or go mad. Madam Vallet arrived in Canmore last week and I will be seeing her soon. Being notorious for leaving things to the last minute, I finally sat down and completed the painting, today.

To fully appreciate this post, I invite you to read There Are Places I Remember from April 28th. With the portrait done, I can now publish the following which has been on hold as a draft since then. I deliberately didn't show you the inside of the Auberge Ravoux because I was saving it for when I had finished this ...


Last month (March 23rd) Jean gave up his battle with cancer. I ache for Marie Claire. In my heart of hearts I painted this double portrait for her. But, perhaps I needed to do for myself, to help me process this horrible loss. Such a fine gentleman gone much too soon.﻿

During an amazing lunch at the Auberge, Bill and I were seated in front of the lace curtains so that we could take in the activity of the cafe. In the painting I opted to place the Vallets in our seats. The lace of the curtains becomes lighter and brighter towards the top of the image to symbolize the path of Jean's ascending spirit.

This was a most tender moment, one I am so pleased to have caught on film. We had been talking about the abundance of lovers who kiss publicly on the streets of Paris. Here, Jean leans in as if to give Marie Claire a kiss. I love her look of delighted anticipation. Did he actually kiss her?  I honestly couldn't remember. Marie Claire maintained that he gave her a gentle peck.


Now that I have stood on top of Table Mountain I can scratch another item off my bucket list.  Last year, when we camped (for the first time) at Beaver Mines Lake right beneath the striking mountain, I knew I would not only paint it but I would have to stand on that peak one day.

With my last journey of such epic proportions undertaken three years ago and given my level of unfitness you might say it was foolish of me to take on such a vertical hike, and you'd be right!  The elevation gain is 2510 feet; 765 metres for you converts.  Could we have had a clearer day?  I don't think so.  The forecast high for July 18th at nearby Pincher Creek, Alberta, was 31C.  It seemed even hotter on the trail. 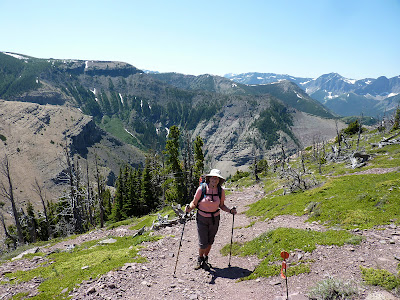 Going up I was on a natural high spurting aloud about how much I miss trekking in the mountains.  "I can take on Mt. Robson!" I exclaimed (yeah, right).  The stunning views at the top not only met my expectations they exceeded them.

With the utmost caution I just had to crawl out to the edge and peer down.  So far down to the lake and campground below. 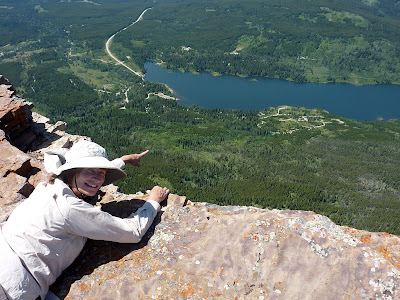 Going down was grueling, exhausting and oh how I wanted to be carried!  Days later my muscles still ache.  Would I do it again?  Oh yes!

Art for TV and Flat Screens

﻿
﻿
Friend and fellow painter, Erica Neumann, has a wonderful gallery and studio at 101 Elma Street, Okotoks, Alberta.  If you can't get there in person, please browse her dynamic, innovative paintings on her website:  http://www.ericaneumann.com/

On the leading edge of technology Erica has also created a website "Art for Flat Screens".  She has kindly included my badlands paintings on it.    ﻿﻿

﻿﻿
As explained by Erica ...
﻿﻿﻿﻿﻿﻿
The site is virtual art, set to music - when the art shows are clicked on and played full screen, they turn your flat screen into a painting that changes every 30 seconds.  Soon (in a couple of years?) everyone will have their TV integrated with the computer, and have screens all over the house that would need art - so they're not black when not being used.  Our mission statement is "to provide easily accessible art for people, and to provide a new source of revenue for artists." I wanted to be the first online gallery for this, except it's so new no one knows what it is ... soon though!
Please check it out and I invite you to pass this link along: http://www.flippingartgallery.com/
Posted by Alice Saltiel-Marshall at 9:34 AM No comments:

In this week of magnificent summer weather our usual mid week R-Podding opportunity was sandwiched by fun times with departing and arriving guests.  To try and squeeze in some camping would have been ridiculous.  So instead, on Wednesday, we took a day trip through The Gap where The Old Man River cuts through the eastern range of the Rockies and went to play in the Alberta Forestry Reserve.  Here we had a picnic lunch followed by idyllic hours of soothing pleasure along one of the three creeks in the immediate vicinity.  When we found this spot, last year, I fell in love with it and have longed to go back ever since.
﻿﻿﻿ ﻿
﻿﻿﻿﻿
While I painted, he fished; what a richly beautiful place it is and such glorious ways to spend an afternoon.

It's been over a year since I worked en plein air.  Here is the fruit of my labour ... bugs, caught in the wet paint, and all.  I've learned (the hard way) how to best get rid of these critters.  Wait until until the paint is dry; they brush off with ease then!
﻿﻿﻿

﻿﻿﻿﻿
﻿﻿﻿﻿
Summer has finally arrived and we've been enjoying a lot of visitors and getting out frequently in the R-Pod.  Which means there has been little painting going on and therfore I have nothing new to show you.  Recently, I have had a series of amazing flashbacks and so I thought you might enjoy a story about one.

In 1976 and for five years, Bill's first Ranger posting was at Chain Lakes Provincial Park, close to where we live now.  There we met and were embraced by neighbours, the Wilsons.  I incubated images of their ranching life for a good five years, and it wasn't until after we'd moved away that I finally began to paint it.  Who knew that once I got started I would go on such a roll?  To the extent that a curator once said "You have enough cow paintings to launch an entire exhibition of just them ... but not in my gallery!"
About a decade ago a woman telephoned to announce that she had the above painting and asked if I would like it back?  As the new owner of Conquest Art she had found it in a closet, didn't want it and didn't know what to do with it.  I'd always thought it had been sold and never dreamed I'd ever see it again.  But, she advised that it had been leased out.  Since I'd always mourned selling it, I happily agreed to her proposal of exchanging it for a landscape of the same size.  And that's how it came to be back in our collection, hanging above the fireplace in the den.


Last month I notified the winners of The Claresholm Art Club's raffle.  It was established on the phone that, as fate would have it, one of the recipients was Ruth Wright, Leo's Mother!  When she came to collect her prize we had a wonderful visit and I shared with her the painting's provenance while Bill made a print of it for her.  Pretty cool, eh?
Posted by Alice Saltiel-Marshall at 6:32 PM 1 comment: