July 12th to 16th; Bill and I were delighted to be welcomed back at Win and John's home in Creston, B.C. John's passion for gardening meant gorging ourselves on fresh raspberries, strawberries, peas and tomatoes. 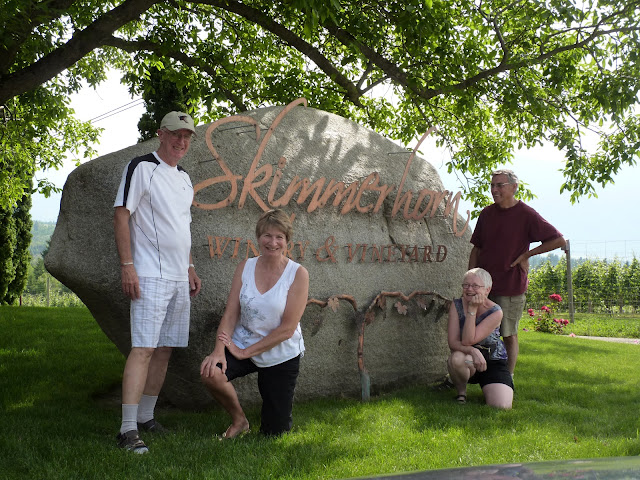 And naturally, there were many hours spent in Winderland, although this visit Win and I were more moderate over the time we spent in her studio. This enabled us to take in some of the local offerings, including visiting the above winery and Creston's Saturday Market. We also drove north along the east side of Kootenay Lake to Crawford Bay where we had a fabulous lunch and toured the amazing and assorted artisan's studios there.


There is excessive laughter while we work side by side (or when we're just gadding about).  I wish everyone could know the joy this brings. It spills out in the colourful work we produce ...

In her pieces, Win will need to explain what techniques and materials she used and their real titles!


We experimented with distressing photographs and playing with copper!  Ah, copper ... since we are in the very early stages of learning how best to employ it, I'll save talk of that for another day!

To see the complete photo essay of our Creston visit please click here.

The Big Ones - Part Five

In October 1996, Bill and I had the good fortune of trekking, with 17 others, in the Khumbu region of Nepal.  We were "support hikers" for a Canadian climbing team making a bid for the summit of Mount Ama Dablam (elevation 22,494 feet). After assembling in Kathmandu and a short helicopter flight to Lukla we began a 12 day trek on the Everest trail with Ama Dablam's base camp our destination.

After such a rich cultural experience and seeing the magnificence of the Himalayas, I was eager to paint my impressions. For the month of February 1997, Bill and I had a residency at the live-in the Gushul Studio, in Blairmore, Alberta, a former photographer's studio now administered by the University of Lethbridge. There I created the work for our first exhibition together - The Alice & Bill Show.


Beside us at base camp (elevation 15,100 feet) there were groups from Holland, Austria, Britain and Ecuador; each focused on their turn to attempt the summit. There didn't appear to be any interaction between the teams. On the morning which I depicted in Prayer Fires our Canadians were the first team on the mountain making for the summit. Folks in all camps were diligently tending fires. Unaware of the tradition, I queried our lead Sherpa who explained that the fires carry prayers of safety to the climbers; I was so impacted I burst into tears. This painting may have sold countless times but it was one I insisted on keeping ... until Laura signed on with Adam as co-owner of their Canmore home.

Ama means mother and Dablam (the snowy bulge just below the summit (a hanging glacier) means charm box; the ornament Sherpa women wear around their necks. I painted the stand alone mountain as I first saw it with her glorious, sweeping arms dripping in brilliant, lacy snow and ice patterns against a crystal clear blue sky.

After the trek, we spent a week resting in Bali. Our joint show featured Bill's photographs, my artwork plus artifacts we'd collected from both places. We were thrilled with how well the show displayed in the then new gallery space which the Canmore Artists and Artisans still maintain at the Canmore Public Library.

Our hearts swelled at the response from the community, our trekker pals who traveled from afar and the support of friends who turned out for the opening and the show throughout it's duration.

Husband and wife climbers, whom we never did see on the mountain because they were at advance camps, honoured me when they purchased three of the paintings from the show including ...

The Big Ones - Part Four

Forced to work in the tiny art room at the Icefield on yet another rainy day my painter pals were all irate with cabin fever. I tuned out their bickering and created the painting above which I instantly fell madly for and still love. Not wanting to part with it, it has only ever left home once; to hang alongside the large studio piece of it as part of my retrospective show, in 1997, at The Whyte Museum, Banff.

With no large studio prospects on the horizon and itching to paint another big one, I took the legs off of the dining room table and stashed the lot under our bed. I found room for the chairs in the third bedroom, which was my small, home studio, and set up shop in the dining area of our Canmore house.

With the above finished, full of ambition and good intentions, I launched into this 4 x 6 foot oil of Lake Louise ...


With summer coming on, and the pending trip to Ontario, I opted to put our home back together and the above was shelved until late in 1997.

Although this story is somewhat off topic I simply cannot resist. The family went to Toronto specifically to go to Central Technical School's annual open house and exhibition of student's work. Denise was attending the post secondary art program there and ... as I did in my time ... she had Canadian icon, Doris McCarthy, as one of her instructors. A week later we all went to Doris' for dinner. I was so proud of my family for their silence (although the look in their eyes did not escape me) when they watched to see just what I would do when the baked Spam was placed before me. I ate it. How could I not? And I washed it down with the Grand Dame's excellent, home-made dandelion wine!

The Big Ones - Part Three

My application for a second Leighton Artist's Colony studio resulted in a six week residency, early in 1995. Much of my time was spent creating commissioned serigraphs for The Gallery at Jasper Park Lodge (now Mountain Galleries). Two editions of 200 prints each, 11 colours each, but that is a story in itself for another day.

Standing on the summit of Mount Athabasca presented an entirely new painting perspective. Looking down to valleys below and out across to other peaks gives a God-like sensation which spurred a summit series of small watercolour paintings. I brought these two to the Banff Centre as studies for large oils ...

The Curve of the Summit is somewhat abstracted and perhaps a difficult perspective for folks to comprehend. It did the gallery rounds and was never sold. In July 1997 a guide, whom Denise was dating then, took us and Bill up the face of the Silverhorn (the meringue shaped peak to the right of the actual summit). Standing on the vantage point of the painting I pointed out this perspective to Denise and she understood it completely. It was clear the painting ought to belong to her.

The day before I moved out of the studio I had a most unexpected visitor. He'd been in Banff, unaware that I was there, and had driven on to seek me out at the Mountain Avens Gallery. Owner, Arlene Curry, explained the situation and when he departed (supposedly for Calgary) she telephoned me. I remember willing him to turn back; to return to Banff. When he arrived at my Leighton studio he told me that he felt I had put a hex on him; he'd accidentally turned west, not east, after leaving Canmore. His flight back to Toronto was late that night and so we were able to spend the remainder of the afternoon and evening together.


This was the first time we'd seen each other since our art class' 20 year reunion in 1986.  He wrote these precious lines in my journal: Thanks for the happy visit. After all these years you have become the teacher and I have become your student and for this I am thankful. A decade later Bill and I would join him and his wife, Tina, at their retreat in Newfoundland.  A 100+ year old fisherman's house, at Twillingate.