The Lure of the Iris

﻿﻿
Today the Claresholm Art Club held their last Paint-In before breaking for the summer months.  In spite of the rainy weather (it's been doing that for the past six days) Don and I were the only two members to turn up!  Still, we painted together for a couple of hours.  I finished the above painting which I'd begun two weeks ago at the library painting demonstration.

For years I've had a fascination with irises and their ultimate elegance.  Many of you will know that I have a special attraction to the fiery copper, reddish/orange, golden coloured varieties.

In Greek iris means rainbow ... which explains the extensive range of colours that the flowers can be found in.  Myth has it the flower is named after the goddess, Iris, who was considered to be the messenger of the gods travelling between heaven and earth ... on a rainbow.
Posted by Alice Saltiel-Marshall at 6:58 PM 3 comments: Links to this post

﻿﻿ ﻿﻿﻿
At Easter the kids asked Bill what he wanted for his birthday. He replied "For you all to come to Claresholm to help me add on to our deck and for us to have a tennis tournament".  And so, on the Victoria Day long weekend the family came.  We ate, we drank, we played tennis and the boys brought their carpentry skills.  They worked hard to construct this fantastic addition to our back deck.  What better gift than one of time and labour of love?
To see the entire photo essay of how much fun we had, please click here:
https://www.facebook.com/media/set/?set=a.10150622812935438.674963.715295437&l=3b64036656
Posted by Alice Saltiel-Marshall at 10:08 AM No comments: Links to this post

﻿﻿﻿﻿﻿﻿﻿﻿﻿﻿﻿﻿﻿﻿﻿﻿﻿As an artistic mother I wondered how my progeny would express their innate creativity.  Isn't is marvelous that I never doubted that they would have some?  Denise designs and sews ... http://revivehandmadecollections.webstarts.com/index.html
Laura designs and makes jewellery﻿﻿﻿﻿﻿﻿ ...
http://www.lauramarshall.ca/  And now my heart soars as they have rented a studio space together!
﻿ ﻿
I was thrilled when they asked me to help them arrange and decorate their studio.  On May 2nd I arrived to find all their gear moved in and Denise sewing a curtain to suspend in front off and hide the unattractive back wall.
﻿﻿ ﻿ By the end of the day it was all well organized.  I love how, in the photo below, the girls are arranging displays of one an others creations!  Please go in and check them out ... Art Central is at Centre Street and 7th Avenue, and theirs is the first studio you come to when you enter the left side of the loop! 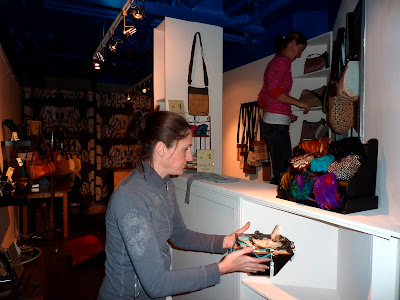 ﻿﻿﻿﻿The art journey is not often on a straight, smooth road.  I feel the need to explain my absence here ... while I had hoped to publish the sequel to my last post There Are Places I Remember other things have taken precedent and the key painting for it sits on my easel unresolved and unfinished.﻿
﻿﻿ ﻿
﻿﻿﻿ ﻿
﻿
As coordinator of the club's 3rd annual, month-long show at the Claresholm Public Library, I'm pleased to report that 16 members submitted a total of 63 pieces to this exhibition!  The opening reception took place May 4th when we had the unveiling of the What Do You See? project.  Don Campbell conceived the idea and, in February, he circulated an image inviting members to paint their interpretation.  Nine members took up the challenge.  The results were fascinating as were the artist's comments about how and why they arrived at them.  Not satisfied with her first attempt Judy Dahl painted three in total!  Pam Copeland (http://www.pamelacopelandart.com/) was unable to attend the opening so I shamelessly stepped in to claim her gorgeous entry ...
﻿
For more photos please click on this link:
https://www.facebook.com/media/set/?set=a.10150594968475438.667163.715295437&l=ee9d5e42d1

And now, along with these two ladies, I am involved in a public art project.  We're hard at work researching and preparing the maquette, but we did take time off for Mother's day!
Posted by Alice Saltiel-Marshall at 10:54 AM No comments: Links to this post