I'd like to believe that my body has opted to have any complications before this operation rather than after. The scheduled date for reconnecting my colon to my rectum (and closing the stoma) was scheduled for June 4th. That date is still fixed but the surgery focus has changed to deal with the surprise bowel problem. It won't be known until colorectal surgeon, Dr. Jenken, operates if he will be able to do what was originally planned as well.


It all began back in April, a week after we arrived home from the Philippines. Thank goodness it didn't happen while we were there. It started with severe stomach cramps and when they didn't let up I went to see our GP. We began the investigation with a stool test which ruled out parasites. X-rays didn't show anything so I had a CT scan which showed a low grade abdominal obstruction but not actually what the obstruction was. It could be intestinal adhesions (not fun) or stool. I was advised to eat a low fibre diet of foods that were easy to digest. As passing stool was extremely difficult the Doc recommended I take Lax-A-Day for a few days. This resulted in diarrhea, but it was going where it was supposed to go - into the colostomy bag.

On May 15th, a couple of hours after after a bowl of tomato red/pepper soup I suddenly expelled a mess of lumpy matter (more like vomit) through both my vagina and my rectum.  This in a public washroom. I was shocked and frightened. I alerted Bill to come in and see it. As we were in Calgary, we took me directly to the Foothills ER. After waiting 3.5 hours the Doc deemed there was nothing they could do and I was sent home. Later it was established that it was that undigested lunch.

The discharge accelerated over the next few days to the point where every time I ate anything, including drinking a bottle of Ensure, I had the same result. Expulsion out of both rectum and vagina. Another visit to the ER, this time in Canmore, determined I had developed a new fistula from the small intestine to my vagina. The burning of this undigested food exiting via both orifices was so painful I stopped eating for a couple of days. On May 21st, I tried a whole, small avocado and a soft boiled egg. Just over an hour later it exited the same routes. Over several hours, it continued to pour out. Once it stopped, the burned perineum took hours to calm down. Absolute living hell. This was the Victoria Day weekend and we had to cancel our flight to Victoria. On Tuesday morning, I phoned Dr. Jenken who advised me to go to the ER at Rockyview Hospital the following morning and he would find me there.

This hospital is not only beautifully located it's newer, more spacious and a lot less busy than the Foothills. May 23rd, I arrived at 10:30 to find no waiting at the ER. Dr Jenken was alerted. Blood work, urine test and paperwork were done. I was admitted and in a bed by 1pm, immediately after which, I was whisked to a procedure room where Dr. Jenken did a scope of both my vagina and my rectum. On the big screen, I saw both fistulas. There has been one between my rectum and vagina, as a result of the first surgery in November 2016, but it is of no consequence since neither are attached to anything anymore. With the scope over, I was back in the room by 2pm.


Initially, I was in a ward of four (the scenic photo at the top of this post) but after two nights I was moved to a room for two. Again I was lucky in getting the window seat, this time facing north.

On May 25th I was taken by ambulance, accompanied by, Gord Garrett, the best paramedic ever. He and driver paramedic, Geoff, took me to South Health Campus for a Vaginogram which confirmed the findings of the scope the day before. The two gents waited for me at South Health and brought me back to the Rockyview.

A PICC line was installed on the inside of my upper right arm, on May 24th. The line (which turned out to be 47cms or 18 inches long) lead to a vein in my chest. A perk of the PICC line is blood can be drawn through it avoiding a new stab in the crook of my elbow every time, which was daily.

Every day, a substantially large bag of liquid food was pumped, via the PICC line, into me over a 24 hour period. I'm never hungry but I sure miss the taste of food in my mouth. It was days into the feeding program when I announced that I was going squirrelly. Wish I'd thought to say that sooner. At first the feeding time was changed to over a 12 hour period, then it was upped to 16 hours. This enabled me to be unplugged for a few hours, don street clothes and leave the hospital. On one outing Bill and I went to a matinee of the film Book Club. It was hilariously funny, light and spirit lifting. We smiled, laughed and, like teenagers, held hands, throughout the entire movie.


An equally pleasing gift left by Alex was what he wrote under Patient Goals. It makes me smile every time I look at it!


In an effort to slow the discharge of fluids (yes there still is rather a lot, even though I am not 'eating') every 6 hours I'm given an injection of octroetide. It stings like hell. Every 3 hours I'm given a tablet of codeine for the same reason. As well I am topped up with an antibiotic via the IV. Dr. Jenken still feels there could be new cancer growth but all tests, scopes and biopsies have found none.

Avery made this awesome drawing of me and Fred, my dancing partner, the IV pole ... 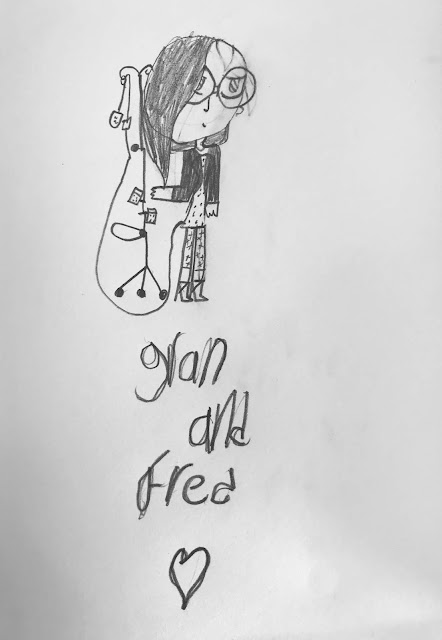 Surgery is slated for 12:50 today. I ask for your prayers and best energy vibes. I'll keep you posted.


Posted by Alice Saltiel-Marshall at 10:27 AM 7 comments: Links to this post