I would not have known about the Hispanic Society of America had it not been for my friend Liz Wiltzen who visited it earlier this year. And bonus, folks, the museum is free. Joaquin Sorolla's paintings were the draw. His absolutely outstanding 14 canvases of Vision of Spain range from 12 to 14 feet in height and total 227 feet in length.


The society was founded in 1904 by scholar and philanthropist Archer Milton Huntington (1870-1955) who from a very young age was fascinated with Spanish culture. Doors of the museum at the Beaux-Arts building in Harlem opened in 1908.

I was blown away by the Sorolla's, pleased to see famous works by the Spanish greats; El Greco, Goya and Velazquez and impressed with their other extensive collections which include Modern, Golden Age and Medieval art, plus excavated artifacts from as early as the second millennium B.C.

In 1911, when Huntington commissioned Sorolla's monumental work he envisioned it would depict a history of Spain, but the painter preferred the less specific "Vision of Spain" opting to feature the culture of the regions of the Iberian Peninsula. Despite the immensity of the canvases, all but one was painted en plein air. At each site models posed in local costume. By 1917 Sorolla was, by his own admission, exhausted. He completed the final panel by the middle of 1919 and suffered a stroke in 1920, while painting a portrait in his garden in Madrid. Paralyzed for over three years, he died on August 10th, 1923.

Although I neglected to note the artist, or the period, I was awestruck by this relief, painted carving ...
﻿﻿
﻿ 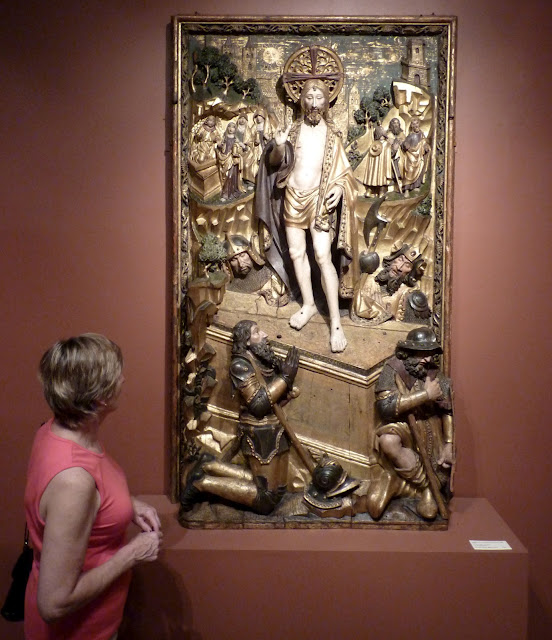 Just look at the incredible workmanship in this detail photo ...  ﻿ 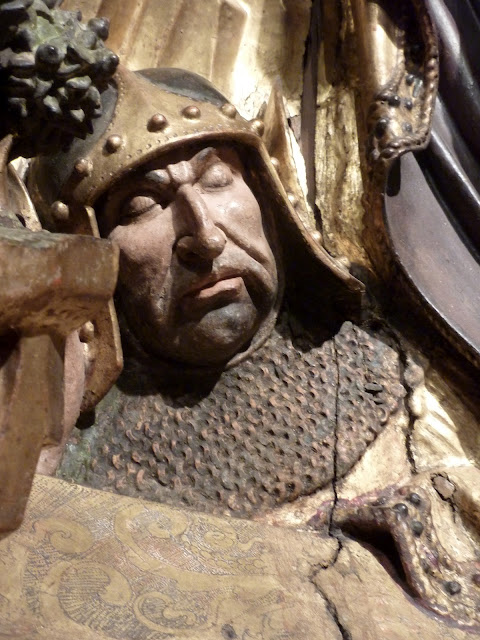 
My current passion for mixed media had me marvelling over the piece above, a 1693 oil on panel encrusted with mother-of-pearl.﻿
﻿﻿
Posted by Alice Saltiel-Marshall at 3:25 PM 2 comments:

High on my list of things to see in New York City was the Statue of Liberty and Ellis Island. Going with a gang of Saltiels served to enhance my visit. Our little group was swallowed up in the estimated 15,000 thousand, daily tourists. The ferries to Liberty and Ellis Islands dock in Lower Manhattan at Castle Clinton. One of the functions of this circular sandstone fort was as America's first immigration station. Over 8 million people arrived there from 1855 to 1890.

The security at the ferry boarding terminal is as stringent as at any airport. 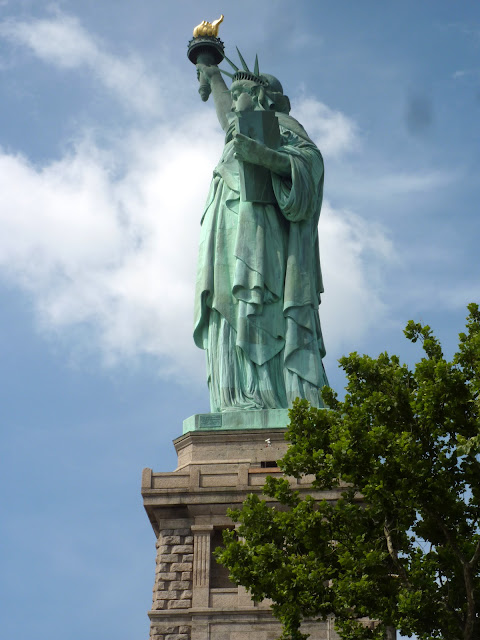 I knew the National Monument was a gift from France. I did not know that the robed figure represents Libertas, the Roman goddess of freedom, who bears a torch and a tabula ansata (a tablet evoking the law) upon which is inscribed the date of the American Declaration of Independence; and that a broken chain lies at her feet. I learned also that the hollow Statue, composed of thinly pounded copper sheets, was designed in Paris by Frederic Bartholdi. The French engineer, Gustave Eiffel (of the Eiffel Tower) designed the massive pylon and skeletal framework which allows the Statue's skin to move independently and yet stand upright. In transit, the Statue was reduced to 350 pieces and packed in 214 crates. Reassembled; it was dedicated on October 28th, 1886.

Another ferry took us to Ellis Island, which was made part of the Statue of Liberty National Monument in 1965. It has hosted a museum of immigration since 1990. With plans to restore all 33 buildings, on the island, to date only three are complete.


The history, facts and figures of Ellis Island are staggering. Individual states regulated immigration before 1890. The Federal government assumed this responsibility when it opened the Ellis Island facility on January 1st, 1892. From then until closure, in 1954, it received more than 12 million immigrants. Arriving in NYC, ships would dock at the Hudson or East River piers. First and second class passengers would disembark there, pass through customs and be free to enter the United States. Third class and steerage passengers were transported by ferry or barge to Ellis Island where everyone would undergo a medical and legal inspection.

Doctors sometimes only had six seconds to scan each immigrant during the line inspection. If a doctor found any indication of disease he marked the shoulder of an immigrant's clothing with chalk; with "L" for lameness, "E" for eyes, for example. Marked immigrants, some of whom received several of these mystifying letters, were lead to special examination rooms. Those with visible heath issues or diseases were sent home or were detained for long periods of time.

The Main Building included administrative offices, a baggage room, railway and telegraph offices, money changing stalls, as well as dormitories with 600 beds, a dining hall, kitchen facilities and showers. ﻿﻿A hospital was opened in 1902, receiving heat, light and power from a plant on the island. The kitchen prepared 2000 meals a day for the immigrants and 300 employees. It treated disease, the passing of 3500 patients and it delivered 350 babies (who received immediate citizenship at birth).
﻿


As the very first person to pass the new facility Annie Moore received a $10 gold coin and has been immortalized with the above statue. Another 700 people came to America that day.

On my own, I viewed the film "Island of Tears" and slipped into a guided tour spending so much time indoors that I didn't leave any to wander the exterior grounds. But Laura and Adam did. They saw the American Immigrant Wall of Honour and photographed familiar names; Koebel, Marshall and Saltiel. 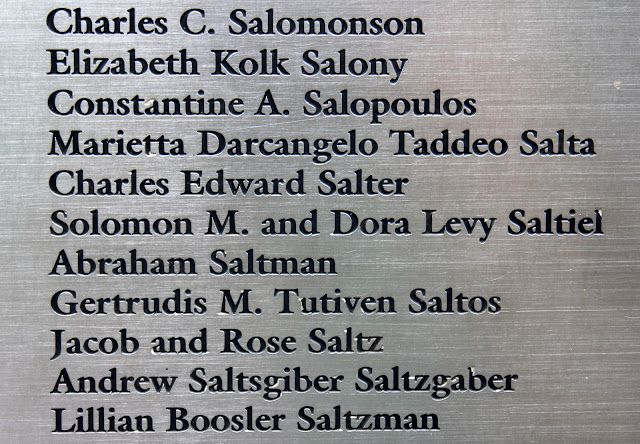 Any Saltiels with names here are not my direct ancestors. My paternal grandparents immigrated to Canada, from England, in 1905.

A return ferry took us back to Battery Park where we waited for our bus pick up ... 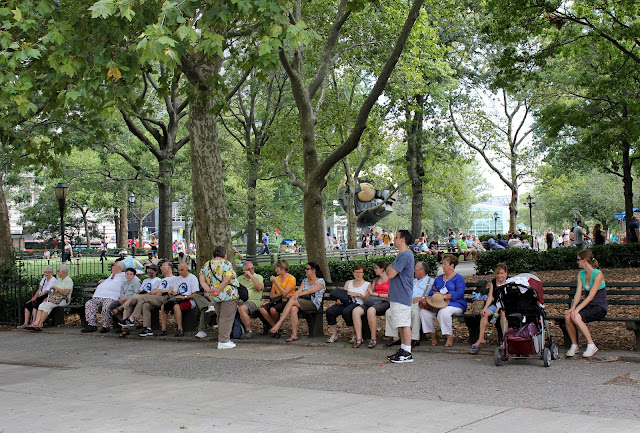 ﻿
The Sphere, in the background was sculpted by Fritz Koenig. It once stood in the plaza between the World Trade Center towers. Having remarkably survived, with only dents and holes in the 9/11 attacks, six months later it was relocated to Battery Park.

It seems I'm not finished talking about the International Shealtiel Reunion. I'm compelled to share what I learned on our walking tour. Jai Zion of the Lower East Side Jewish Conservancy was a most excellent guide; a wealth of information on early NYC, when it was called New Amsterdam, and on the Jews who settled there beginning with the first 23 who landed in 1654.


In Chinatown, beneath the skyscrapers of downtown Manhattan, wedged between other buildings, is a tiny this synagogue. It was a privilege and a rich highlight for me to tour the inside.


In 1997, when we attended the Thessaloniki, Greece reunion, I was naive. I thought if you were a Jew you were a Jew. There I learned about  Jews from Northern and Eastern European (Christian) countries and  Jews who lived in the Iberian Peninsula, African and Middle Eastern (Muslim) countries. It was the Sherpardim who were expelled from Spain in 1492. Nor did I know that Yiddish (based on German and Hebrew) which many people think of as the language of Judaism, is really the language of Ashkenazic Jews. Sephardic Jews have their own language; Ladino, which was based on Spanish and Hebrew. 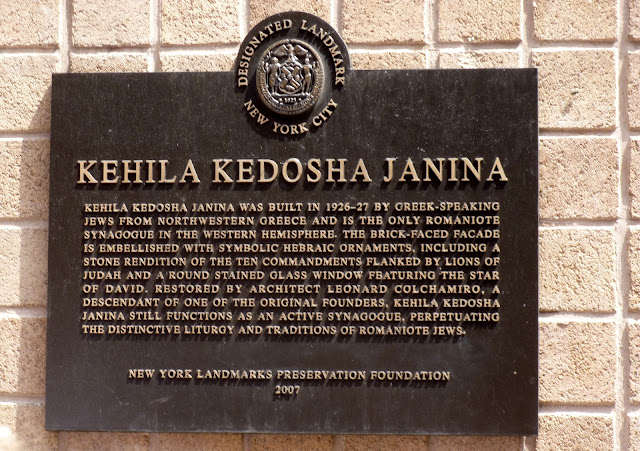 At Kehila Kedosha Janina Synagogue and Museum we learned about the Romaniotes. An obscure branch of Judaism of which few Jews have ever heard, with traditions dating back to Roman times. After the destruction of the Second Temple, these Jews were sent on a slave ship to Rome. A storm forced them to land in Greece, where over the next 2000 years they developed uniquely different ethnic and religious customs.


It was at the Greek reunion where I also learned, by attempting to sit with Bill, that men and women are seated separately in Orthodox synagogues. And it was there, when the family was attending a Sabbath service, that I found myself seated beside two elderly ladies of the local congregation. When I noticed the large numbers tattooed on their bare forearms the hairs on the back of my neck stood on end.

Marcia Ikonomopoulos described the story of the Romaniote Jews, from their entry into Greece in the first century to their current life in America. She spoke passionately about the town of Janina, in northwestern Greece from whence the synagogue takes its name. And then she opened the cabinet to show us their spectacular Torah scrolls.

Posted by Alice Saltiel-Marshall at 10:11 AM 5 comments:

The 7th International Shealtiel Family Reunion, July 25th - 29th, 2012, was the impetus for my first visit to New York City.

Shealtiel (one of several spellings) is a Hebrew name. You'll find it in the Bible. The first Shealtiel mentioned was a son of Jeconah, king of Judah. Much of the family remains Jewish although I am not. My great grandfather married a Christian and there ended Judaism in my line. I was one of many, born Saltiel, who thought they were alone in the world beyond our immediate relatives. An astronomical amount of work has been done to piece together our history and our ties. For years Ed Motola has worked tirelessly on our genealogy. http://www.shealtiel.com

RIP Vibeke Sealtiel Olsen, 1968-2012, we're sorry you missed this latest gathering of the clan. Vibeke had a personal passion to find her relatives and in so doing discovered Saltiels all around the world. At the tender age of 25 she spearheaded the first International Reunion in Amsterdam, August 1994, which Bill and I were unable to attend.


Thanks to Moshe Shaltiel (of Chicago), who consults telephone directories wherever he goes, for finding me when he was visiting Banff in July, 1990. Within a couple of years Moshe announced that he had found a cousin more closely related to me than he and I are. Miles Saltiel of London, UK is very much the glue holding us together as editor of the Shealtiel Gazette, to name the most visible of his generous efforts.

Attending their first international reunion were the Koebels; our daughter, her husband and their baby girl ...

I am provided with an opportunity to be with first cousins who live on the other side of Canada ...


These reunions are really four-day conferences of epic proportions. A fascinating, stimulating mix of tours, meals, workshops, meetings and social interaction. Bill and I were delighted to have been at both the 1997 Salonika (Thessalonika) Greece and the 2000 Barcelona, Spain reunions.


There is an unsurpassed richness to being a part of such a worldwide family that makes my heart swell. Bill and I are grateful for the Saltiels, around the globe, who have openly welcomed us into their homes. And we have been honoured in receiving relatives in ours. In future, we look forward to hosting other family members.

A most key person was missing at the 2012 reunion.  Recovering from a medical issue Moshe was unable to attend and he was very much missed.


After the reunion, we stayed on in NYC for another week. More about the city, that wouldn't let me sleep, next time!