An Ascent of Exceptional Degrees

... was painted 31 years ago. Here is the history behind it.

The fictional Exceptional Pass was originally conceptualized by Jon Whyte and Karen McDiarmid to gather together contributions by local artists in a variety of media on the subject of a fantasy landscape. The Whyte Museum in Banff presented the first exhibition, Beyond Exceptional Pass, in 1978, before we returned to live in the Bow Valley. Included were fancifully documentation, fabricated journals, texts, maps and art depicting imaginary places. While I didn't submit to it or the second exhibition I did to the third. An Ascent of Exceptional Degrees was accepted to 1985 exhibition entitled The Myth of Exceptional Pass ...
﻿
﻿

﻿
With my classical art training I've have a fascination with Renaissance paintings of floating cherubs. It was on a visit to Niagara Falls I found myself mesmerized by an exquisite sculpture of cherubs which inspired me to paint my own. With the help of his mother the young son of our then neighbours was my model. All three babies are Ross Baradoy.

The Myth of Exceptional Pass catalogue shows the  writings, descriptions and images of all that was exhibited by 30 participants in the show. The text accompanying the image of my painting reads "In the sky high above a snow capped Rocky Mountain peak, round, plump, heavenly cherubs are gently drifting and dissolving into the clouds creating a mystical atmosphere. The cherubs are born of the sky, fathered by the mountains and mothered by the mind and spirit of all who pass by."

The surreal approach of An Ascent of Exceptional Degrees challenged me. At the time it was the largest canvas I had ever painted. The mountain peak is Cascade Mountain, the Wood Lily a token of my passion for wildflowers.

It was an honour to have my painting featured (unfortunately in black and white) on the cover of the invitation card. Among the other particulars, it read: Dress: Exceptional, So I did, but I certainly wasn't the only one. Artists and guests alike came to the opening reception in costume. I made the laurel with lilies from my garden.


I participated in the fourth (and last) Exceptional Pass exhibition in 1992, but that's a story for another day.

For many years An Ascent of Exceptional Degrees hung above our bed in our Canmore home ...

We produced a limited edition of 10 canvas mounted photos of the painting at 20" x 16", one quarter the size of the original. Unlike other reproductions of my art, these took a long while to sell simply because the painting is either instantly loved or found to be completely unappealing.

I've been an artist for decades, first as a student, then as a commercial artist and ultimately as a full time, fine art painter in (since 1972). In excess of a couple of thousand paintings have poured forth from the end of my brushes. More than anyone could possibly keep. When we left Canmore we hosted an art sale in which I offered up An Ascent of Exceptional Degrees.﻿﻿


It did not sell, but it wasn't long before it caught the attention of someone in Claresholm. An arrangement to purchase it in instalments was agreed upon and a substantial deposit was placed on the painting. After a couple of years, with the painting still in my possession and without any further payments, I approached the client. Long story short, in March of 2015, I refunded the deposit. Clearly destiny had something else in mind for the painting

Last week and for beautifully moving reasons, Jim enquired about acquiring it for his wife.  Esmé has loved and wanted the painting for a very long a long time. I was thrilled to bits when Jim offered to let me share in the gifting of his surprise. On February 11th, Bill. and I delivered the painting. We had no plan about the presentation but events unfolded splendidly, I was poised  to catch this photo as Esmé came out of their kitchen ... 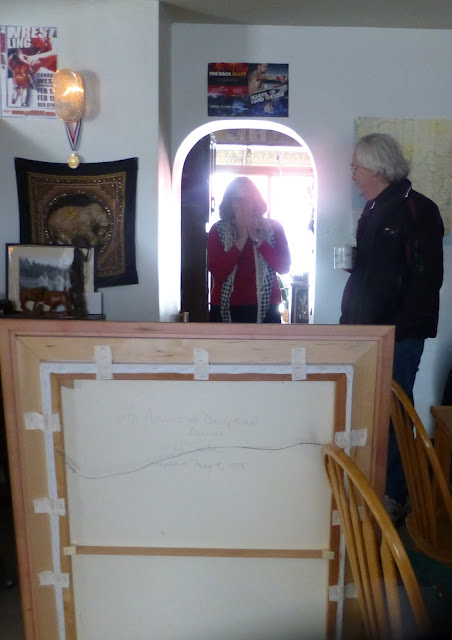 We have known these fine folks for years which makes it rich beyond measure to have An Ascent of Exceptional Degrees find their home as it's permanent residence. The bonus is that I have visitation rights. Many thanks Jim and Esmé.

Jim and Esmé have sent me a photo of the painting installed above the door beside which I am standing in the previous photo. It's is good company. The cherubs soar up high with Ed the Eagle in the entry way of their home. 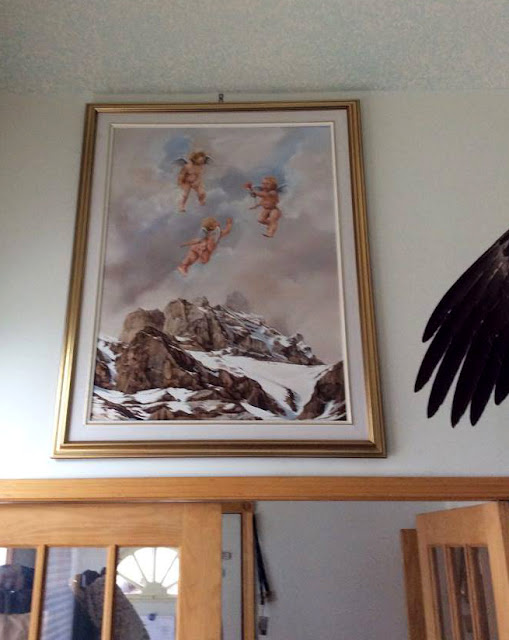 Posted by Alice Saltiel-Marshall at 11:07 AM 11 comments: