This weekend, cities and towns around the province are hosting a plethora of events to celebrate Alberta Culture Days. Thanks to Julia Thompson and Barb Bell of Claresholm's Family and Community Support Services for their promotion, encouragement and facilitating artists to showcase their work at assorted local business establishments in town.

For the occasion, Judy Dahl and I transformed the natural light drenched studio space at Karen Linderman's Law Offices into a mini gallery. Friday afternoon, September 26th we were pleased to receive visitors to The Alice and Judy Show.


The response to Judy's rich, luminous photographs printed on metal were as glowing as the images themselves.

We thank everyone who came out to view our work and share our hospitality!

And to my readers, many thanks for not choking on four blog posts this week. I'll give it a rest for a while now. Tomorrow, Bill and I leave on another of our great adventures. This one promises to be a tremendous thrill!

Posted by Alice Saltiel-Marshall at 8:22 AM 2 comments:

Timed to catch the September changing of the larches, for several years now a group of painters have booked themselves into the Alpine Club of Canada's, Elizabeth Parker Hut at the staggeringly beautiful Lake O'Hara in Yoho National Park, B.C, The last time I joined the gang was in 2007. I was overdue. This year there were ten of us, many there to seriously plein air paint. I was there for so much more.

Daily access to Lake O'Hara is limited by two school bus loads in at 8:30AM and two more at 10:30AM. Of course you may opt to walk the eleven kilometers up the road. Half of our group were shuttled in on the early bus. I was with the others on the later bus arriving at the lake at eleven o'clock on September 16th. I walked my gear up to the meadow where the hut is, moved in and returned to the lake to paint this ...


That first afternoon, there were four others painting at the famous and revered Sargent's Point. In sight, but not in my way, were ...

Lake O'Hara is surrounded by an abundance of spectacular alpine lakes and pools, each with their own stunning, distinctive colour. None are much farther than a one hour walk away, all up of course. In stronger times, I was able to hike to so much more than I did on this trip. My new hip turned eight months old while I was there ... I was simply glad that it took me where and as far as it did!


Day three dawned cloudy and drizzly.  I convinced these three to hike with me on the Oesa trail as far as Victoria Lake ...

While I retreated into the trees to sit down, enjoy the view and my lunch, these diehards attempted painting (watercolour no less) in the rain ...

To escape the wet and cold, plein air painting was aborted. We returned to the hut where folks further developed what they had started. Sharon set up her easel in the kitchen where there are skylights in the otherwise very dark log cabin. I joined her there. Referring to the above photo (on the display of my digital camera) I placed my paint box on the kitchen counter and began the painting below. When the kitchen was needed for it's real purpose, I bailed.

Rhonda was our cook. Her gourmet, abundant, dinners were decedent, delicious, and capable of making the other hut guest envious. Each evening spontaneous concerts erupted. With her meadowlark voice, Patti sang and Rick skillfully played the guitar which hangs up on the cabin's wall. And yes, the rest of us joined in and we sang up every song we knew!


The expedition was magical and everything I hoped it would be. I hiked, painted, enjoyed fine company but above all else I filled my soul with the hours I was privileged to spend in the magnificently beautiful Canadian Rockies. Please click on O'Hara photos to view all of the pictures I took.

On day four we awoke to rain and the mountains veiled in cloud.  Rather than spend a day in that most of us caught the 9:30AM bus out. Truth be told, if it had been glorious weather I'd have hiked to Lake McArthur, which, with my already aching legs, would have been a huge mistake.

Special thanks to Patti for organising the expedition, to Rhonda for being our cook and to everyone else for contributing to the splendid time I had.
Not limited to painters, the group this year included photographers, spouses and friends ...
Patti Dyment
Rhonda Rasmussen
Sharon Williams and her husband Dave
Alex Yonge
Pat and Bob Allin
George Alig
Jan Chalupnicek

Posted by Alice Saltiel-Marshall at 9:36 AM 8 comments:

Sunny Raven Gallery hosts an annual artist's-made book show which Bill and I participated in (for the first time) last year. This year, a theme of Recovery, Restoration and Change came about in response to the great flood of 2013 as a way for folks express themselves over the task of rebuilding homes, lives and psyches. It wasn't mandatory to adhere to the theme. As we are not residents of Calgary, Canmore, or any part of southern Alberta which was devastated by flooding, both Bill and I strived to develop concepts which loosely tied in with the theme.


Was my idea of recovery from a hip replacement appropriate? Did I even want to make a book about that? Then, serendipity struck when I spied a sign above a consignment shop, in Asheville, North Carolina, and thought "Wouldn't that make the perfect book cover?" I took it as a sign (pun intended) that I should proceed!

Purchased at a thrift store, I took apart a children's board book, sanded and gessoed the pages then created painted backgrounds for most of the photo pages. Others, and the text pages, were printed on pretty, commercially made papers. Bellow are the nine layouts. Hopefully, when you click on them, they will enlarge enough for you to read the text ... 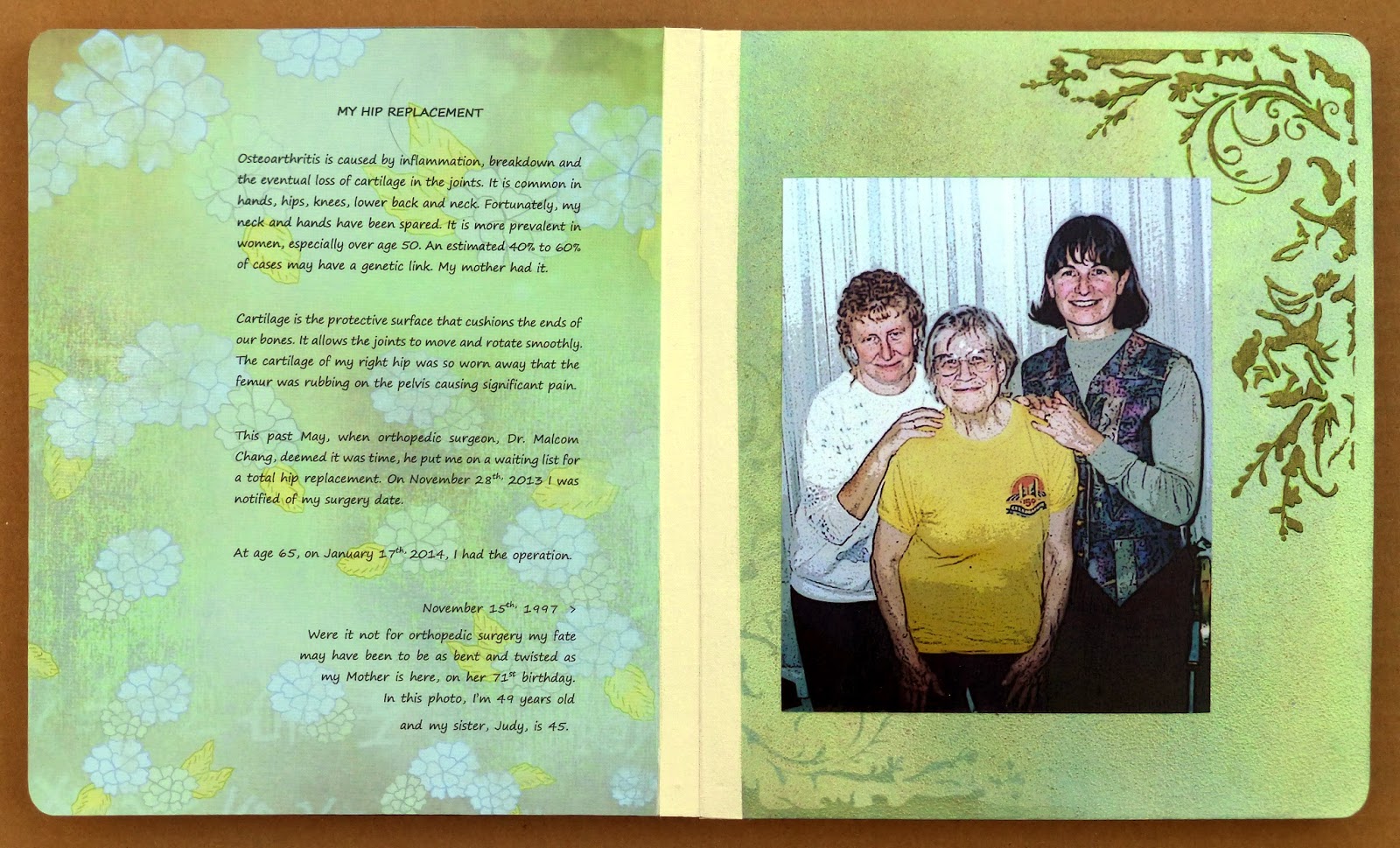 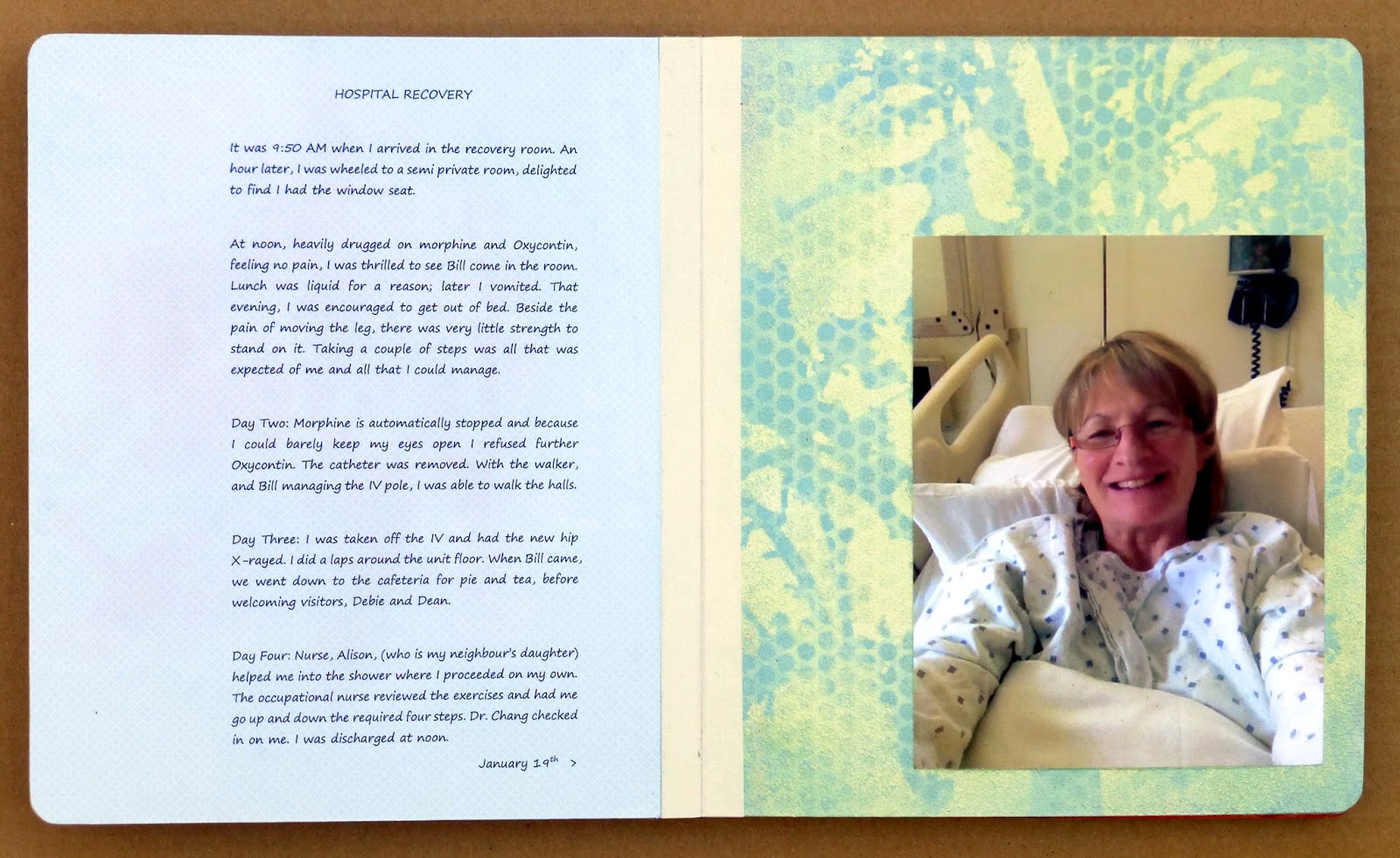 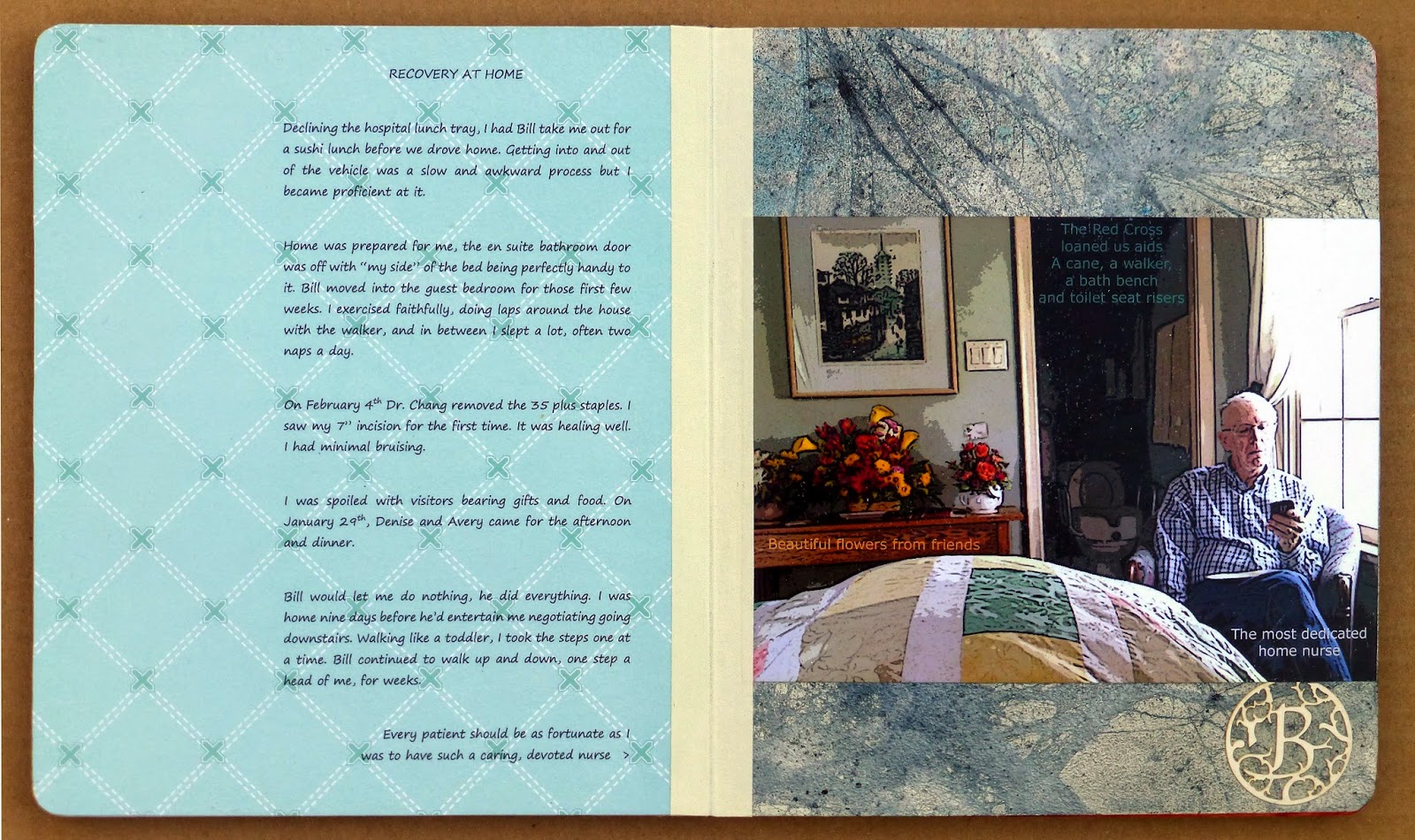 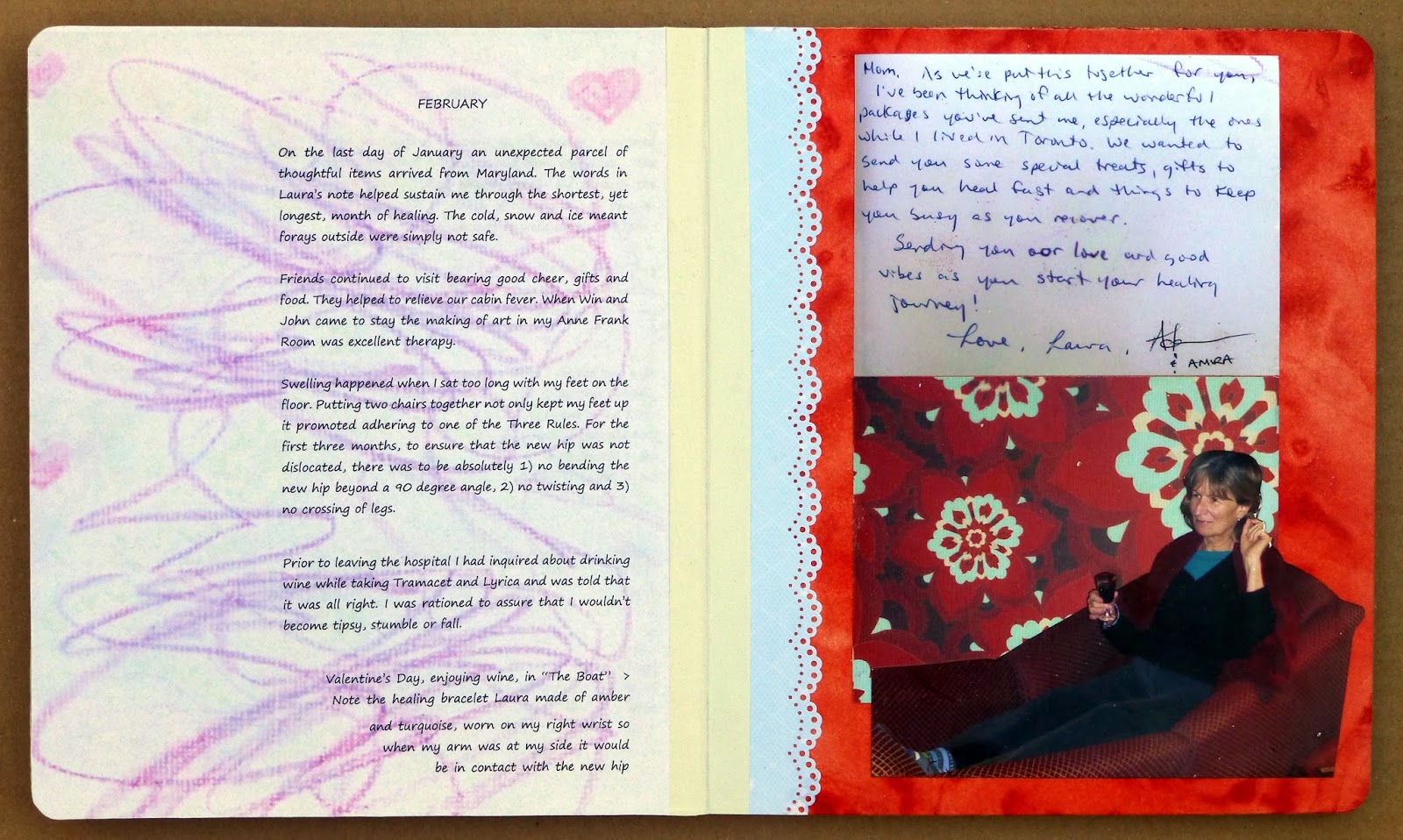 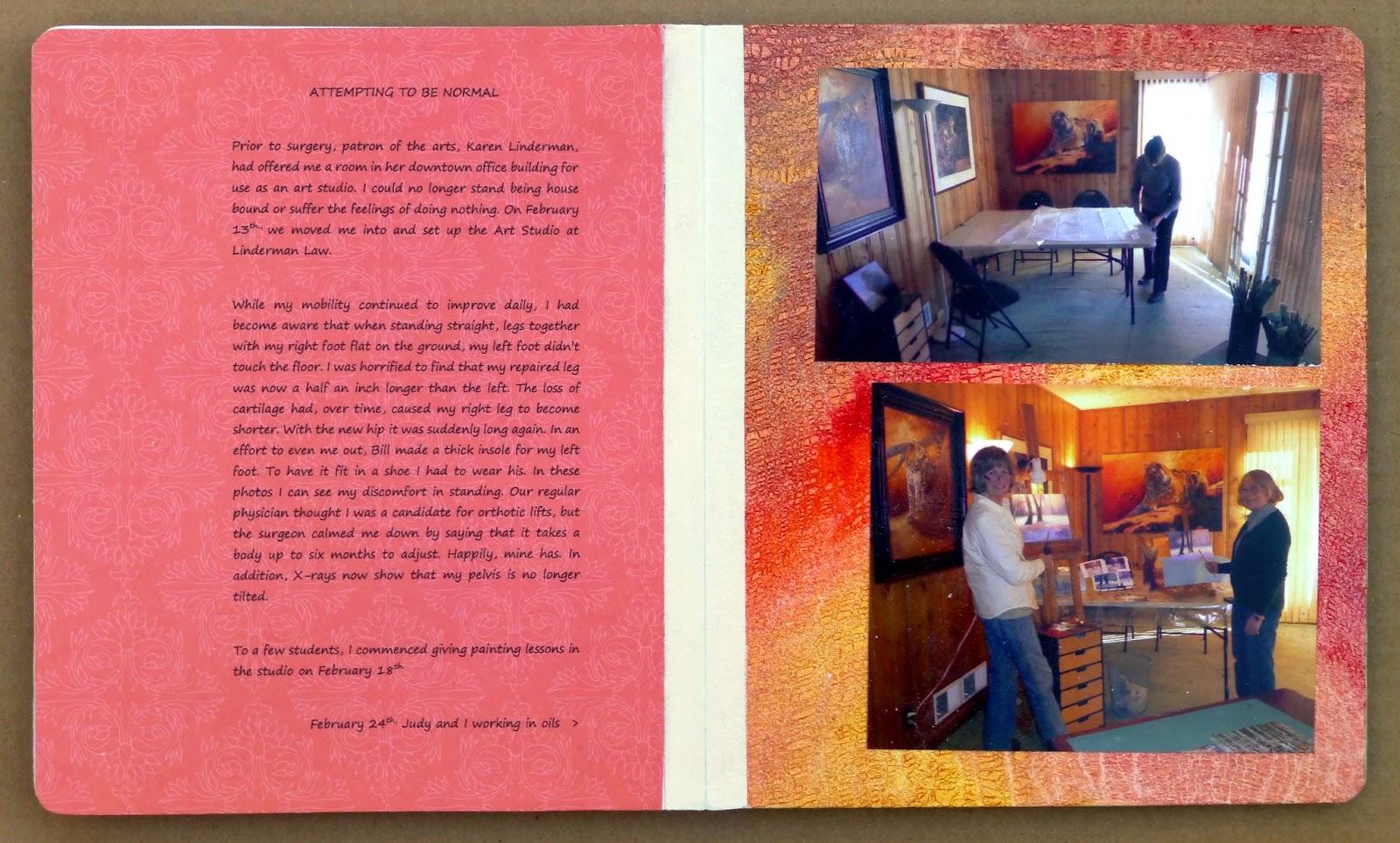 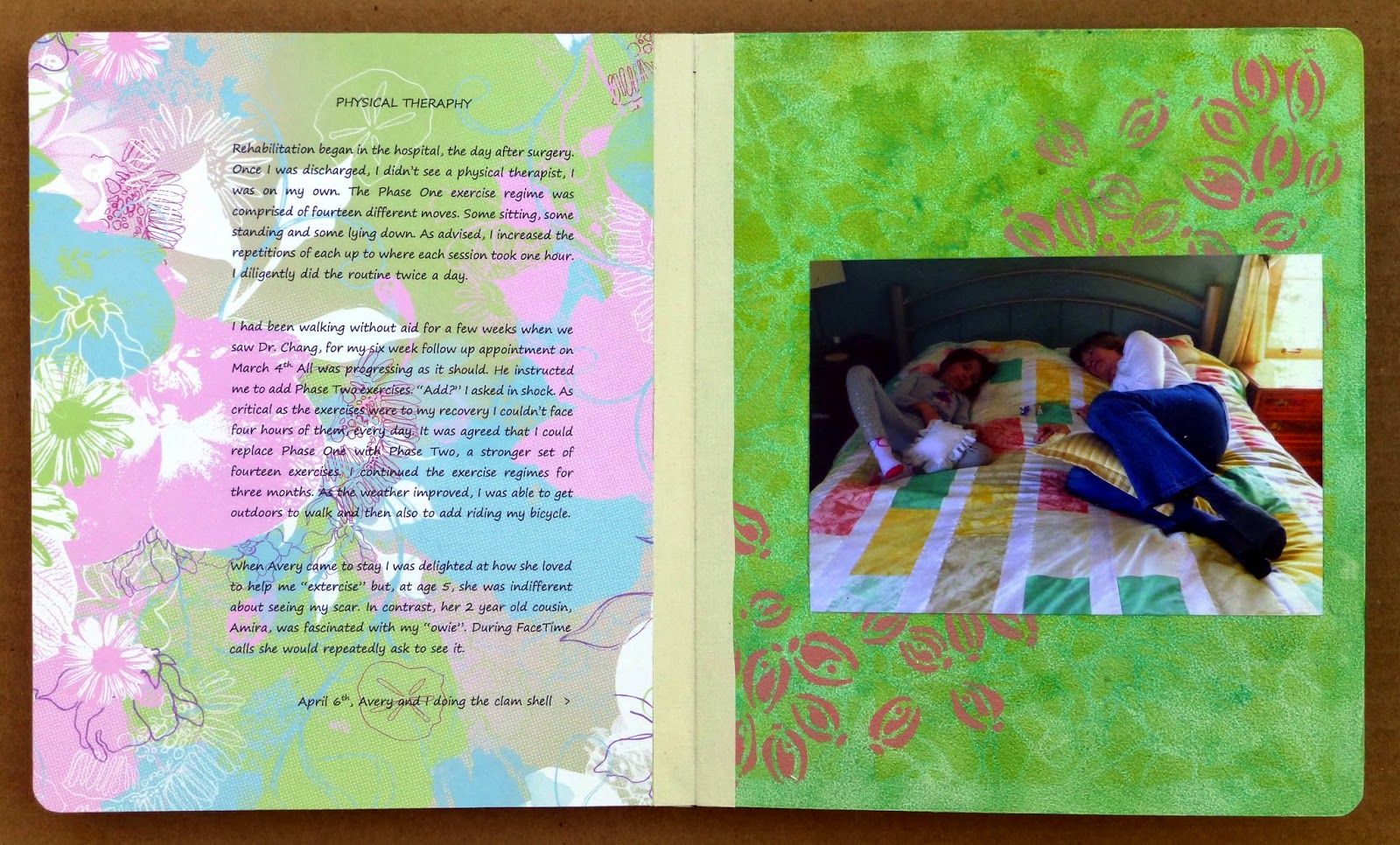 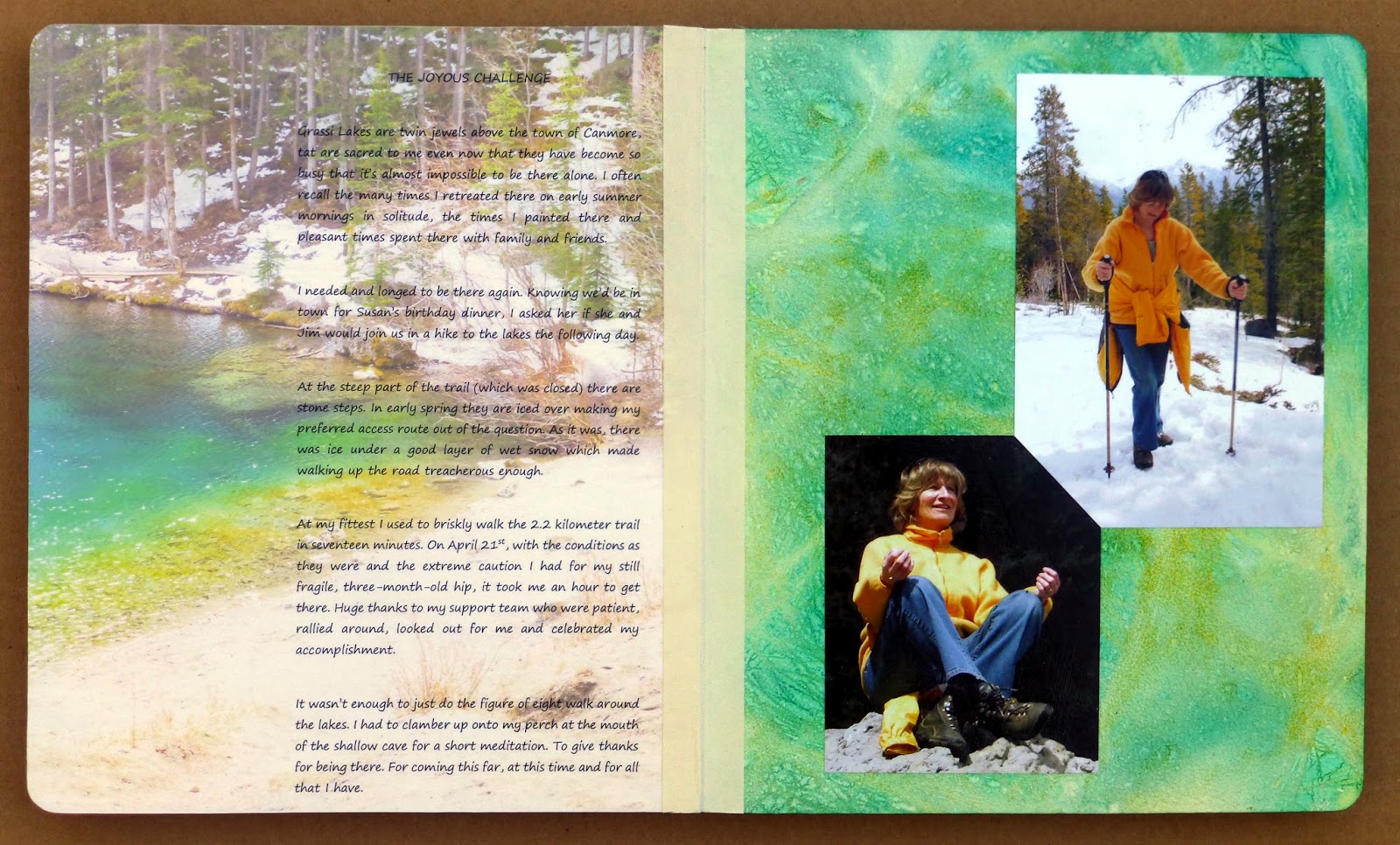 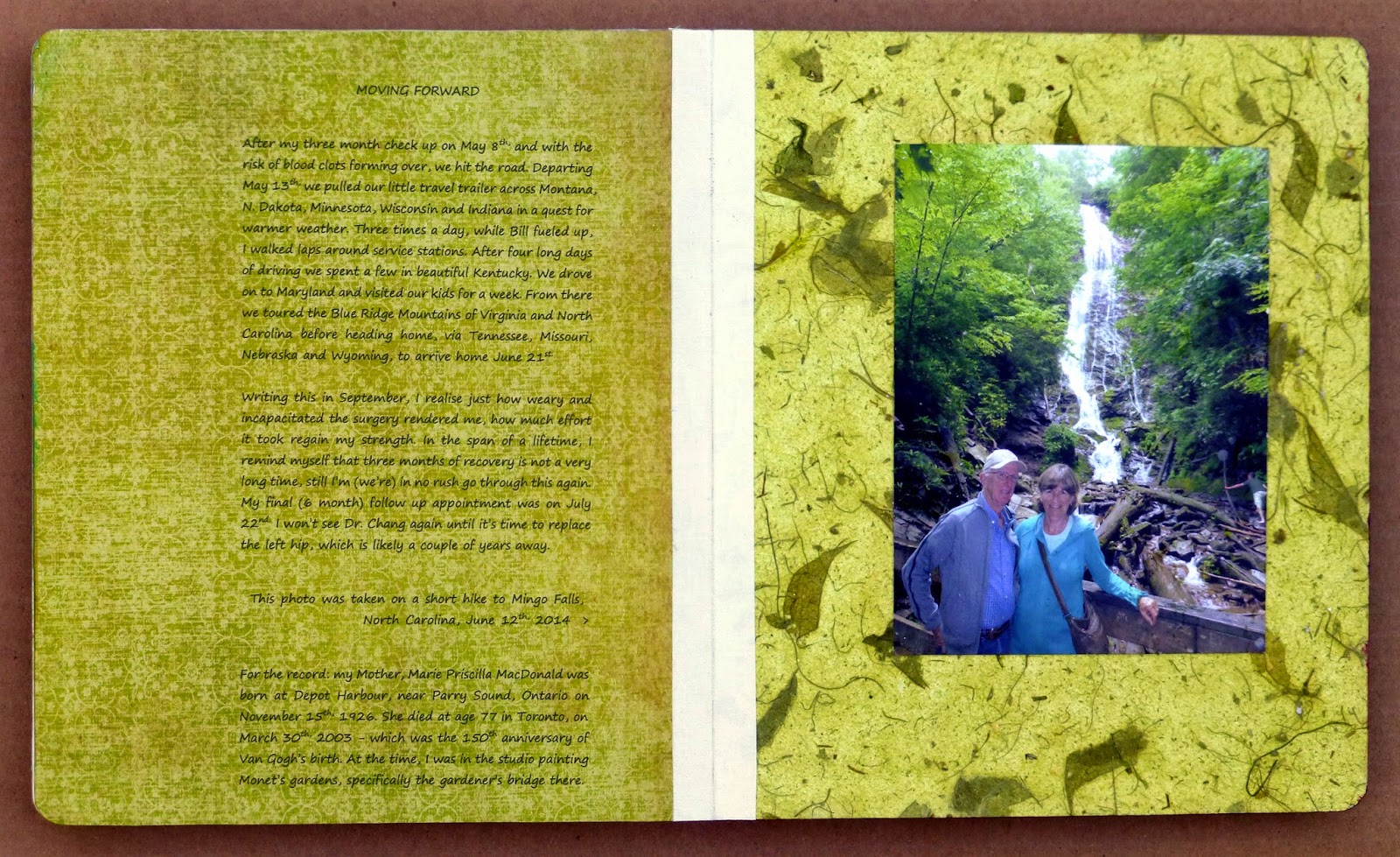 Bill's photo essay book has two chapters. The first is about abandoned, rusted-out trucks and the second is of gloriously restored, old trucks. It is encased in a cigar box that, in Photoshop, he altered the labels of for the top and inside the lid. We presented our books to gallery owners Meg Nicks and Paul Goutiere last Friday ...


The book show continues at Sunny Raven Gallery for the next several weeks.  Please stop in an have a look!

Posted by Alice Saltiel-Marshall at 8:03 AM 4 comments:

An Odd Request for a Wedding Gift

Now, I have been asked to paint some strange things, the seagull commission comes to mind, and the time I was requested to paint dandelions, but this one tops them all!

Delighted to have been invited to their wedding, I asked Alison and John to send me half a dozen photos from their trip to Spain, last fall, so that I could consider options and select one to create a wedding gift painting from. Time passed. No photos came. I prompted them and finally they sent me this one image ...

I flipped and fired off a message to say "We need to talk, call me!" Days passed. They didn't phone. That's when I sat myself down for a heart to heart talk. I rationed that they wouldn't have sent a photo of hams if they didn't want a painting of hams, then reminded myself that I can paint anything - it's a matter of wanting to! This was simply another life challenge; to work with a subject that had no appeal to me. I ruminated, incubated and enlisted ideas from Bill and friends. At long last I came up with a concept and set to work.


At the end of day five the piece was complete.  Here are some detail photos of the painting ... 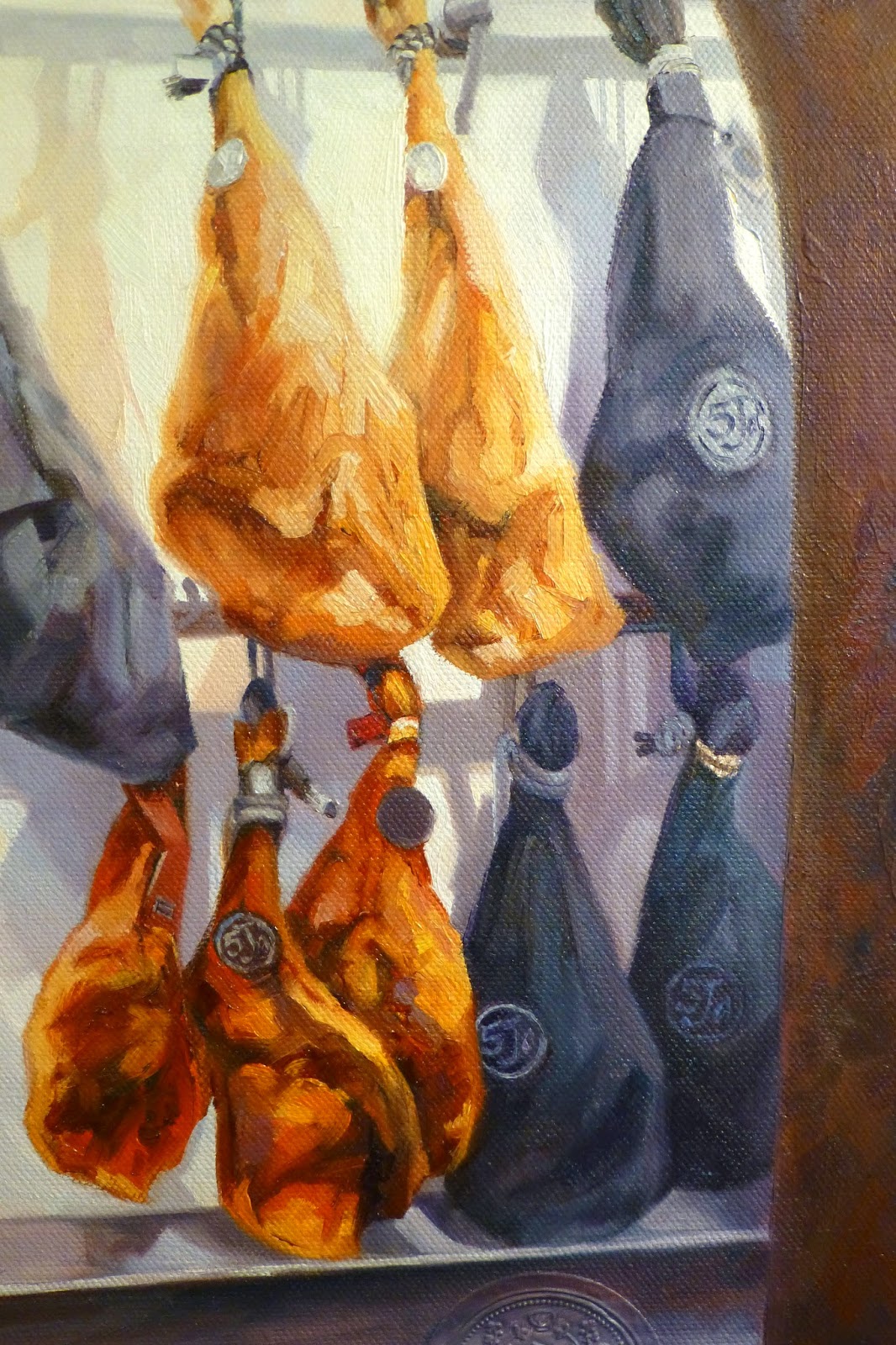 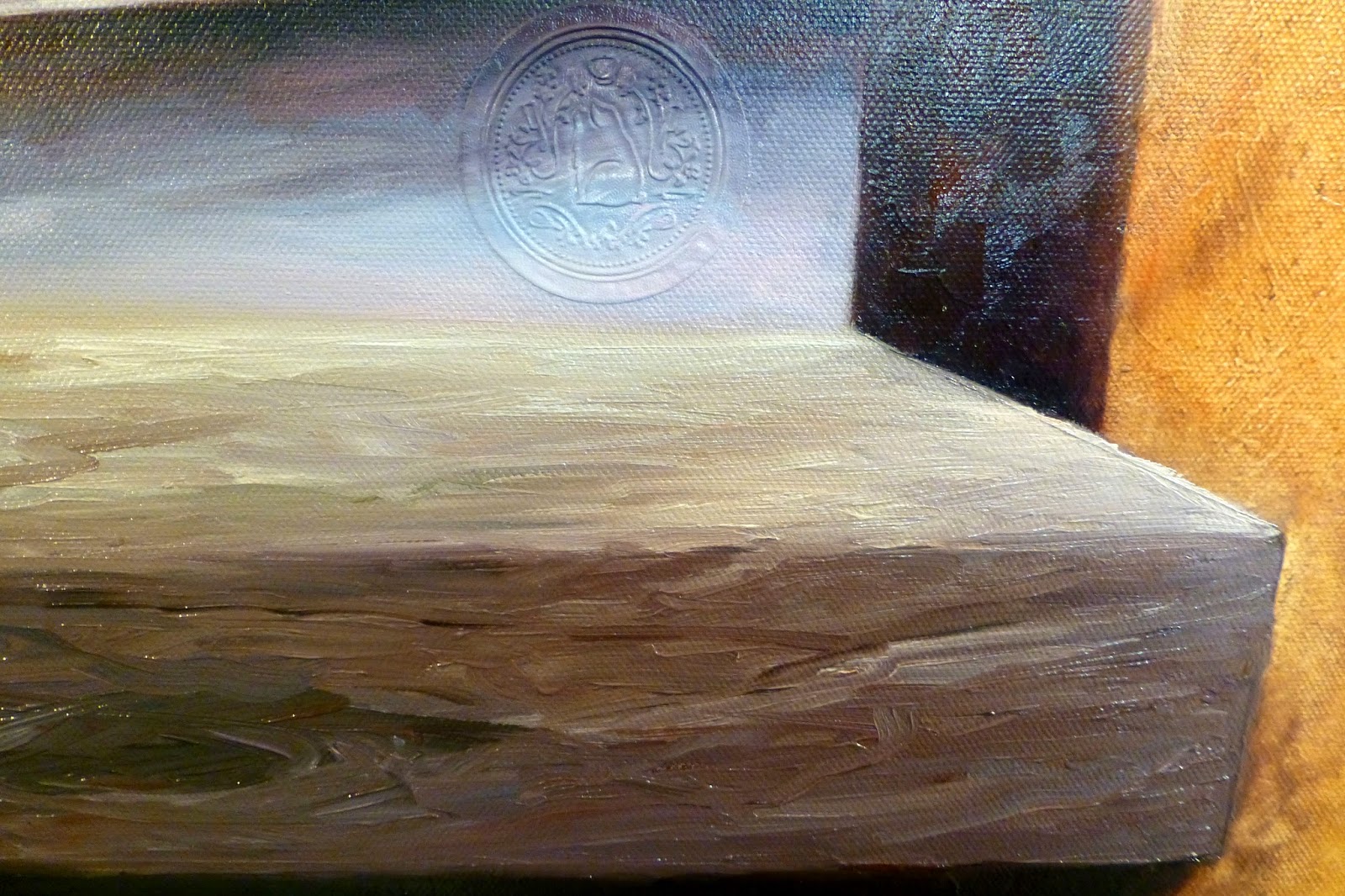 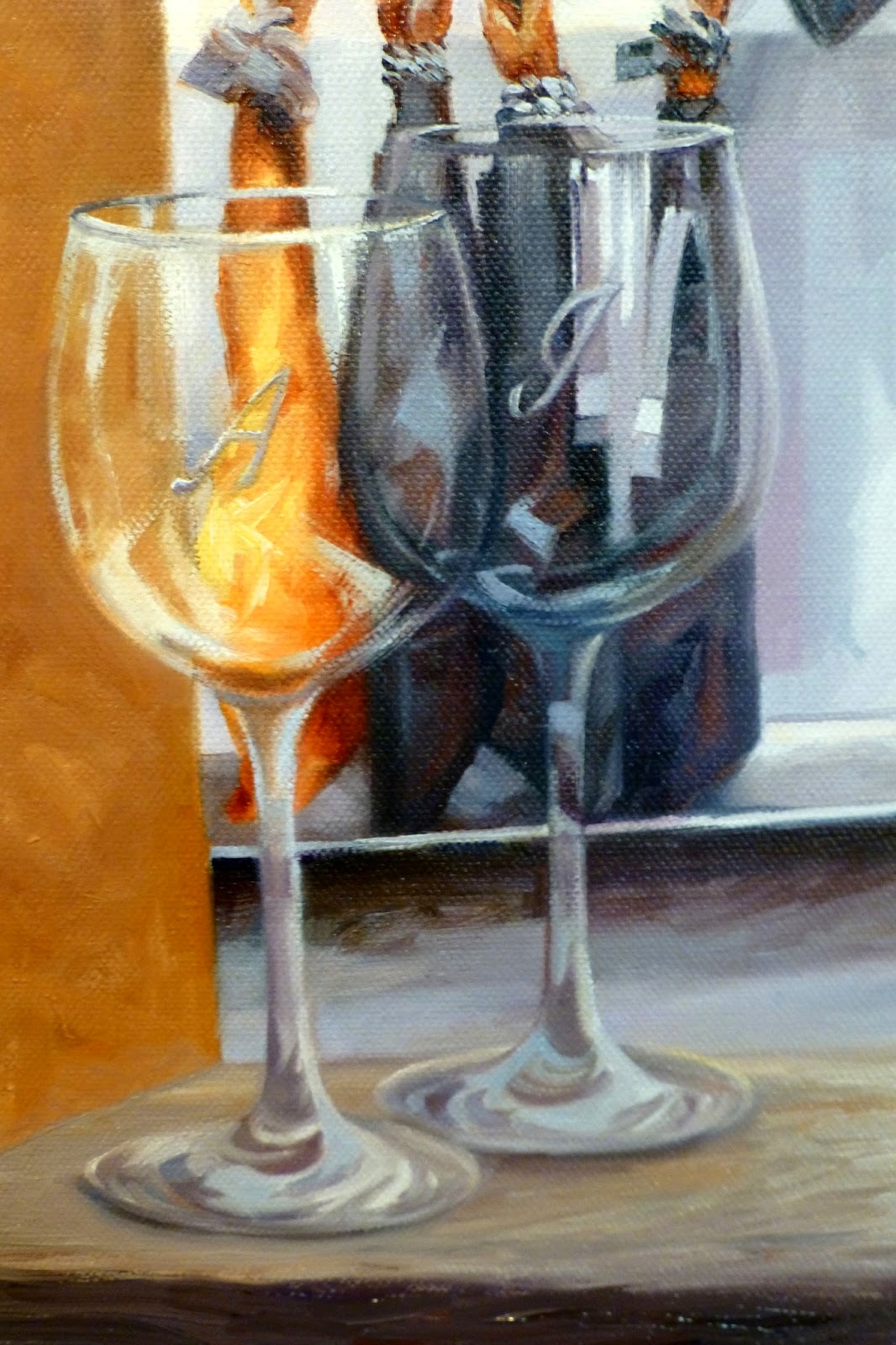 The empty wine glasses symbolize how the wedding is just the beginning of their life together. On the reverse of the canvas, my dedication asks them to fill the glasses with their marriage.

The joy on their faces when they opened the painting, well, it made it all worth while! 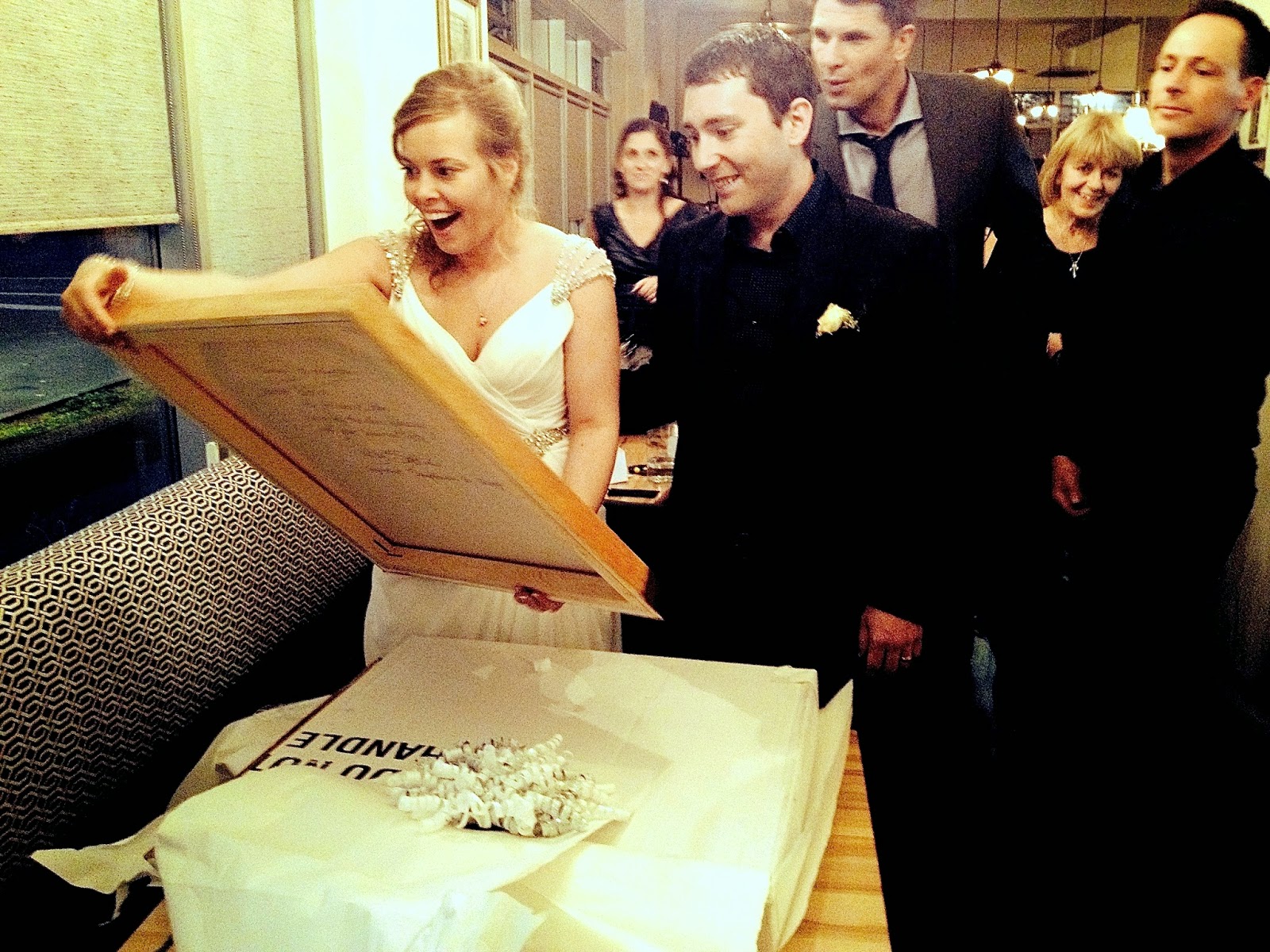 And because I scooped some wedding photos from Kay Boody Bieber I can offer you this lovely shot of the wedding party ...


Posted by Alice Saltiel-Marshall at 8:51 AM 5 comments: