For me it all started in May 2012 with Win Dinn and her mixed media class, when she gave her students, expired B.C. Law books to alter and play with. Mine was off to a great start and then nothing. Project driven I needed a reason to finish. The Claresholm Library asked members of our local art club if we'd create altered books for their 75th anniversary celebrations in February 2013. The law book became My Mixed Media Journey book for that display (more on that here). 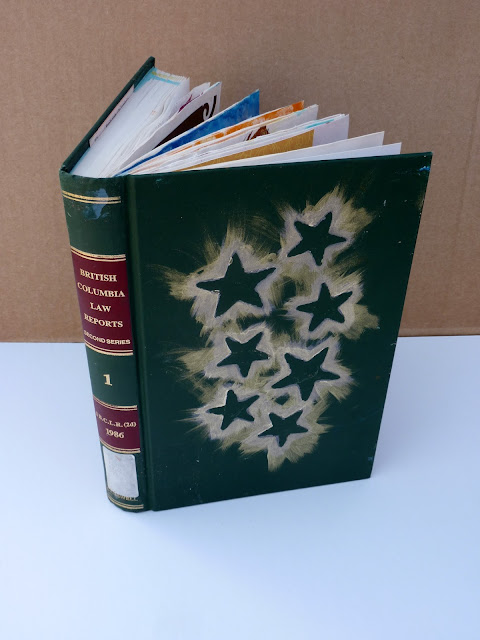 When my husband and I heard about the artist-created book exhibition, TURNING THE PAGE, at Sunny Raven Gallery in Canmore we both became serious about completing our respective projects for submission. While I resumed working on Africa for Amira. Bill outdid himself with Margaritaville a leather bound, accordion, folded book to commemorate his sister's 60th birthday which we celebrated in Las Vegas this past May.

A couple of other altered books from the Claresholm Library's 75th are also currently on exhibit at Turning the Page, they are Judy Dahl's and Kerry Hart's ...

Africa for Amira, is a child's board book, that I'll give to Amira, our granddaughter, next week, while she and her parents are here visiting in Alberta. Linda too will soon be presented with her birthday book! 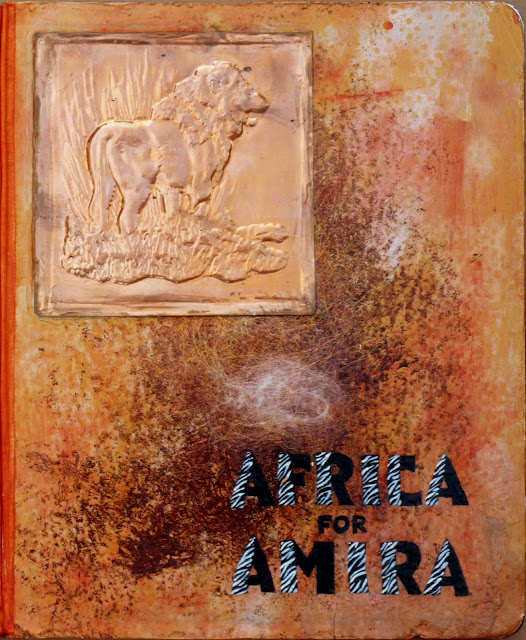 More about this book soon ... I feel it merits a post of its own!

It's my pleasure to share the blog post below. I'm delighted with the administrator's choice of images to illustrate it.

To revisit my posts on this art education, please drop in on these archives:


As well as this recent post: The Interview with Dustin Garnet.

The Arts
A START IN ART:

In junior high I spent inordinate amounts of time working up detailed drawings to illustrate what I thought women throughout history might have looked like.  Concurrently, as the eldest of two sisters in a neighbourhood of predominantly girls, I'd have them open Eaton's catalogues, select garments and draw any clothes they wanted for the dozens of cutout dolls I made them.

The foresight of my grade eight teacher, Mr. Harold Holden, and his recommendation placed me, an inner city kid with poor grades from an impoverished family, on the right path.  Rather than wither at an academic high school, I thrived in Central Technical School's high school special art program.  Being blue collar, my parents thought this was cool.

From 1962 to 1966 our class of the same 30-35 students (some came, some went) became like a family. Often socializing outside of school, we learned and played our way through the grades together.  We were keen, budding artists, wanting to excel and this promoted a healthy competition among us.  Central Tech's top-notch teachers seriously impacted us.  Among the staff were Charles Goldhammer, Dawson Kennedy and his wife Kathleen Kennedy, Virginia Luz, Doris McCarthy, Robert Ross (not the TV Bob Ross!) and Paul Summerskill.  Our instructors were practicing artists who continued to explore, experiment and build their skills.  Their unspoken gift was their living example.  We knew they had rich, full and delightful lives.  It was as if they said 'Here, take the art we teach with you;  it is our way of life and it can be yours also.'

We drew nude models almost daily.  By this repetition we really learned how to draw. Preparing for careers in fine or commercial art we were taught classic fundamental basics of design and layout.  Mr. Kennedy assigned a project where we mixed colours for and hand painted 109 little 5/8" square chips of colour.  These were then laid out to show the subtle changes in hue when we added white, black and three shades of grey to each of eight pure colours.  With that type of hands-on scrutinizing of colour the knowledge of it became intrinsic.  We studied history of art.  In anatomy we learned the names of every bone and muscle in the human body.  We were taught lettering (pre-computer age) by hand painting classic and decorative fonts, and studied methods of printmaking.

Unlike students today, who respond poorly when told to do things over and over until they are mastered, we listened and we did as the instructors asked.  It was a time when teachers weren't questioned.  As art is best learned by watching others make it, our teachers would demonstrate then leave us to work it our for ourselves.  They laid on us the blunt reality that if we were going to succeed in the art world, we'd need to be serious and diligent in our independent work or we'd end up slinging beer.

In our final year, we were advised to assemble a portfolio of our best work for prospective employment or further education.  Behind the scenes our portfolios were shown to people from the industry who came to the school - head hunters of young souls!  I was offered a job as a cartographer with the City of Toronto and began work immediately upon school finishing.  I didn't know what a cartographer was, but I soon learned it wasn't for me.  My map-making career lasted a week before I quit.  Back then, jobs came easily and, on the basis of my portfolio, I was quickly employed again.  I worked as a commercial artist for a number of years.

Ah, but school wasn't the only thing to shape my destiny.  Three years out of Central Tech I met and married Bill, a man with curiosity and wanderlust.  He has always been a huge supporter of my art-making practice.  In 1972, when we first moved west we lived in a rural area, and me without a driver's licence.  At his urging I settled in to becoming a fine art painter.  What has followed are decades of glorious opportunities and experiences, thanks to art as the driving force.  Like my teachers, I'm happily living a life where art is a daily mindset even if I am not actually painting, and I can't imagine it any other way!

You can see an article by the Toronto Sun's Lorrie Goldstein here about the contemporary focus of Central Tech's arts program.

Art and More in Creston

From June 9th to 12th, 2013 we enjoyed another spectacular time in "Winderland". This time our hosts, John and Win Dinn, also welcomed Meg and Paul (of Canmore) into the mix and the madness!


With the boys very capable of amusing themselves, we gals spent some highly charged and very productive time in Win's glorious studio. I think we all had the most fun printing with fresh leaves (plucked from the assorted plants abundant in the garden) which Win demonstrated using her gelli plate ...

﻿﻿
Although you can't tell from the above photo, Meg's painting has a coating of Liquitex's Pouring Medium over it. It's very glossy and gives the appearance of a thick coat of resin. With it's application the heavy textures and the gears have become embedded in a flush surface.


That every artist approaches their work differently is expected. There is much to be learned by simply watching another painter at work. It promotes the desire to make art in other ways, plus there is the opportunity to share products and toys. It's exhilarating to be shown ways you can use materials you've never even heard of!

Painting is so very often a solitary act. Working together is a rich experience, one which I feel must be akin to how it likely is for musicians who play in a group. Imagine how intoxicating the energy must be for them? Even before bringing out the wine!


You can see the entire photo essay of the visit here. To view my finished pieces check my Mixed Media page.

Posted by Alice Saltiel-Marshall at 10:43 AM 4 comments: