Other than the landscape, rich as it is, what comes to mind when I think of France are grapes and flowers And these are what remain for me to show you of the French inspired paintings ...


In a heartbeat I'd return to France again and again, but the world is huge and much more awaits elsewhere! The revisiting of these paintings and the trips only serve to indelibly etch the memories. Sincere thanks for the interest you have shown in this body of work.


Posted by Alice Saltiel-Marshall at 6:22 AM 6 comments:

I've just about shown you all I've got ... this is second to last post about The French Paintings and it's a mixed bag.

The classic street scene in the painting below was deserted the day we chose to visit Chateuneuf-du-Pape.  Perhaps it was too late in the day? Probably it was a Sunday. It's a considerably livelier setting in the photo on this webpage: http://www.provenceweb.fr/e/vaucluse/chateau-pape/chateauneufpape.htm  And yes that's me walking down the street!

A painting I mourn parting with is Chateau la Nerthe. It's a setting outside a nearby winery nearby ... and it was closed as well!


Overwhelmed by the grandeur and decadence at Versailles I chose to paint this close up of a balcony seen at a place I didn't know existed on the property; Marie-Antoinette's Estate. I have another name for it ...


And in the town that Vincent Van Gogh spent his last couple of months ...


Touted as one of the prettiest villages (and indeed it is) Lourmarin is also where the author of A Year in Provence, Peter Mayle lives.  Behind the renaissance castle there I found what I really wanted to paint; Mystery Stairway. But there was also this cascading pot of flowers by a small crumbing stair case ...


Our friend, Marie Claire (who lives in Paris and has a condo in Canmore) followed closely the creation of my French paintings. She suggested I invite Peter Mayle (author of A year in Provence) to one of my solo shows and said that she'd look after getting his address. His is not an address that is not easily obtained, but you need to know that Marie Claire doesn't well take well to getting no for an answer. She relentlessly worked on the staff of Lourmarin town hall until she wore somebody down. I then mailed him a note with an invitation and this was his gratefully received response ... 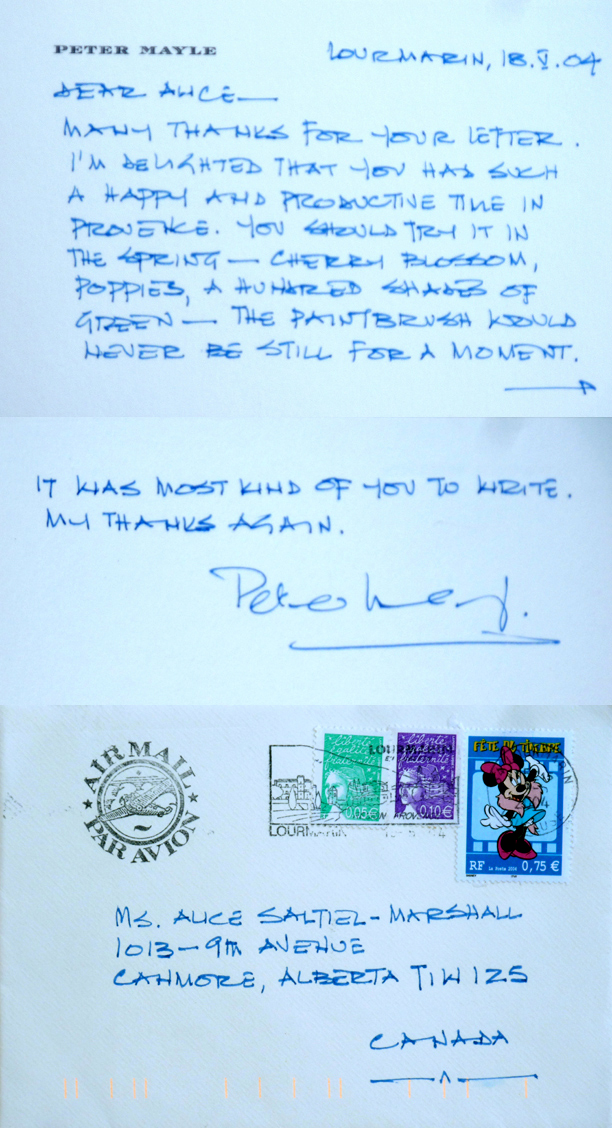 It was here that I realized Bill was right about how I needed to be babysat along rural, country roads. While painting I'm completely oblivious to anything but what is right in front of me. Our car looked vacant because Bill was lying down, on the back seat, reading. But the ever watchful eye of my husband spied a car pull up and the man who got out circle a clump of nearby trees before making his move toward me.  That's when Bill got out of the car to step between me and the stranger. Without any of us speaking a word and as nonchalantly as you please the fellow neatly veered away, got back into his car and drove off.

Les Baux is where the image in my painting Door at Sundown is from.  Despite being wildly touristy it truly is a magical place. I invite you to check it out at http://www.lesbauxdeprovence.com/

And to the east at Rousillion see the bottom of this linked page to find a photo of the square I painted in Portes de Rousillion of doors set in red and yellow walls. The buildings of this entire town are coloured as the cliffs they are built on. Fascinating. Imagine living bathed in such warmth ...

Posted by Alice Saltiel-Marshall at 9:52 AM 3 comments:


Considering that he had severed an artery in the ear lobe incident (December 1888) Van Gogh made an amazing recovery and went back to live in "The Yellow House" in Arles but only for a short time.  In April 1889 he voluntarily admitted himself to the asylum at nearby Saint Remy. Missing artistic companionship and the northern landscape, in May 1990, he left Saint-Paul-de-Mausole for the town of Auvers-sur-Oise.  Two months later he shot himself.

I have already mentioned that the Saint Remy asylum is still a functioning hospital and the pubic is only permitted in the church/cloister area and a room that is recreated to look like the one Vincent occupied.  Naturally admission is charged, and there is a gift shop, but they allowed me to paint free of charge.  Here, unlike the country roadside, I was safe and Bill didn't have to "babysit" me.  He was free to explore elsewhere while I painted there.  On those two days only a few tourists came and when they did their voices were hushed.  For me it was a very reverent and solemn time when I felt completely connected to the place, Vincent's soul, and my work.

During our stay in Saint Remy, in the middle of the deep, dark night, I had a dream so vivid that it caused me to abruptly awake and sit bolt upright in bed my heart pounding.  In the dream I was seated around a boardroom table with official staff of Saint-Paul-de-Mausole.  They announced that they had approved of me painting with Van Gogh but that he himself would have to agree to it.  I said "Doesn't it matter that he is dead?" and they replied "No".

The Asylum at Saint-Rémy

Saint-Paul de Mausole http://www.beyond.fr/sites/stpaulmausole.html is a functioning mental hospital today as it was when Van Gogh admitted himself there in 1889.  The month after Vincent's arrival at Saint Paul he painted his iconic Starry Night.

On our France reconnoiter trip in 2002 it was determined that I needed to paint there.  What contributes to the atmosphere of this place is that it is built on the Roman Ruins of Glanum and beneath them are Greek ruins.  The earth fairly vibrates with centuries of spirits.


We booked a little apartment on the outskirts of Saint-Rémy for the month of October 2003, and the day we checked in we drove back to Saint Paul.  It was early evening, the visitor and cloister portion of the hospital was closed for the day, there was one car in the parking lot and not a soul in sight.  Walking around, outside the south wall, I stopped short and exclaimed "Somebody is painting!"  "Where" asked Bill?  I replied that I couldn't see anyone (and there was no one in view) but I could smell paints as strongly as I have ever smelled them, and I will never be convinced that I did not.

In the previous post I showed you the painting I am working on here:


I know the collector of the painting below will surely recognize the stand of trees behind me.

The Landscape of Southern France

Looking at my paintings of the south of France Bill commented that they have a different light.  Indeed the landscape there does have a very soft light as compared to say the brilliant clarity of the Rockies.  Of course I did somewhat exaggerate the yellowness of it all!


Posted by Alice Saltiel-Marshall at 10:24 AM 3 comments:

Not surprisingly the time spent by Monet's pond impacted me greatly.  At home, I painted it again and again as if in an effort to indelibly etch the place on my psyche for all time.

Thanks for asking me to continue posting The French Paintings.


Yesterday, Judy hosted the first Claresholm Art Club studio tour. Her rural home is filled with art and treasures. As a professional horse photographer she has an endless resource of images for her paintings.  We were dazzled with her binders of catalogued slides filled with a wide range of local subject matter beyond the equestrian.  Judy is immersed in the daunting task of converting them into digital image files.

Judy's current fascination is with high definition resolution photography and why not?  She is an absolute master with Photoshop.

A separate building houses her studio/workshop where she keeps equipment and materials, from when she operated a framing store in town, as well as her painting supplies.

I always consider it a treat to see the creative space of another artist ... thanks for your hospitality Judy!
Posted by Alice Saltiel-Marshall at 4:40 PM No comments:

Claude Monet's home is a mecca for artists.  http://www.fondation-monet.fr/uk/content/foundation  Because of the numbers who visit this amazing spectacle, a maximum of 15 painters per day are allowed to work at Giverny and only on Mondays when the home is closed to the public for grounds maintenance.

From home Bill tried, without success, to arrange for me to paint there.  My sincere gratitude goes to our Parisian friend, Marie Claire, who took the matter in her hands and secured my visit.  The price for the day was 15 Euros, but I'd have paid considerably more for the thrill and honour of painting there.


I was wearing three cashmere sweaters under this rain jacket because it was a dripping, damp and freezing day but that made no difference to me.  My spirits soared to find I was the only one there for the first hour before a group of nine American artists arrived.  The year before I had scouted where I wanted to paint and went straight to it. Clearly on their first visit I was amused watching these artists dart around in fits of glee trying to figure out where to settle.  I have them to thank for both of these photos, for asking me to join them for lunch in the gardener's shop and for sharing their wine.  Marie Claire had packed me a scrumptious lunch but neither of us thought about wine.

In an unsolicited critique of this painting one of the Americans said "You've got a really good start there."  I didn't have the heart to tell her that it was finished.

Right after lunch the other painters left to catch a train back to Paris leaving me with two half empty bottles of wine.  Imagine my delight at spending hours alone, painting and drinking the wine by Monet's famed lily pond?

It was well after I thought my time at Giverny should be up when a Japanese filming crew found me at the pond and asked me to leave; I was simply waiting for someone on staff to oust me.  My painting was finished and so I sat on the bench enchanted, savouring the solitude while waiting for my ride to return.

The evocative memory of this day will give me joy for the rest of my years!
Posted by Alice Saltiel-Marshall at 10:10 AM No comments: