﻿﻿On December 9th, 2013, granddaughter Amira turned two.  I started her birthday painting a month before her birthday but didn't finish until one month after it. Contributing factors to the failure of the first attempt were not fully planning the layout (in a preliminary drawing) the mermaid was too small on the page, had serious anatomical issues and I have no idea why I opted to use so much yellow in an underwater scene?

After ruminating long and hard, I still found myself unable to figure out what to do to rectify my mistakes. Time ran into Christmas preparations, plus I took time out to construct the journal (of my last post). I let it slide over the holidays but was adamant that I would deal with the painting immediately afterward. It had to be competed and in the regular post before my surgery date, January 17th. Mermaid Two arrived in Maryland while I was still in hospital, the day after my hip replacement.

Adam made a video of Laura helping the adorable Amira open her painting which you can view here. I love that Amira thinks the small mermaid is herself and the big one is Mummy!

After finally concluding there was no hope of salvaging the first mermaid I gessoed over her, multiple times. It was a relief to have made this decision; to proceed with a totally new concept!

Contact paper, Mac-Tac as we called it in the olden days, is a shelf liner (clear is best, with a pattern for visibility) available at any hardware store, was used as a mask to preserve the white areas of the mermaids. With these cut out pieces of contact paper in position I flooded the panel with water. Then, I dropped, splattered and manipulated thalo blue with small amounts of cerulean blue acrylic paint into the water, to create the patterns of underwater. 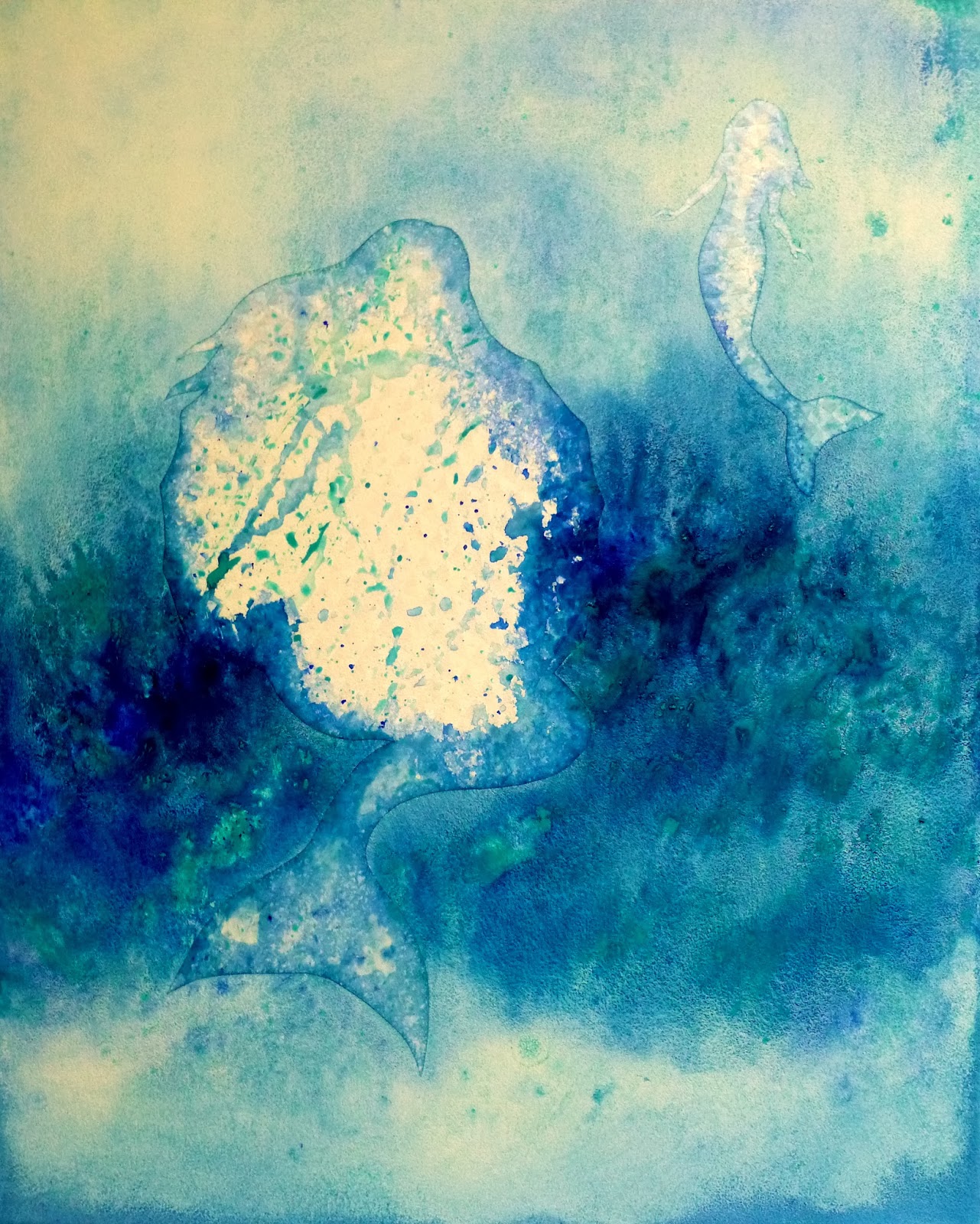 When dry, I thought it was all just too blue so I washed thalo green over it further developing the mottled effects and textures. The sand is real, added by shaking it through a strainer onto wet gel gloss medium.  ﻿ 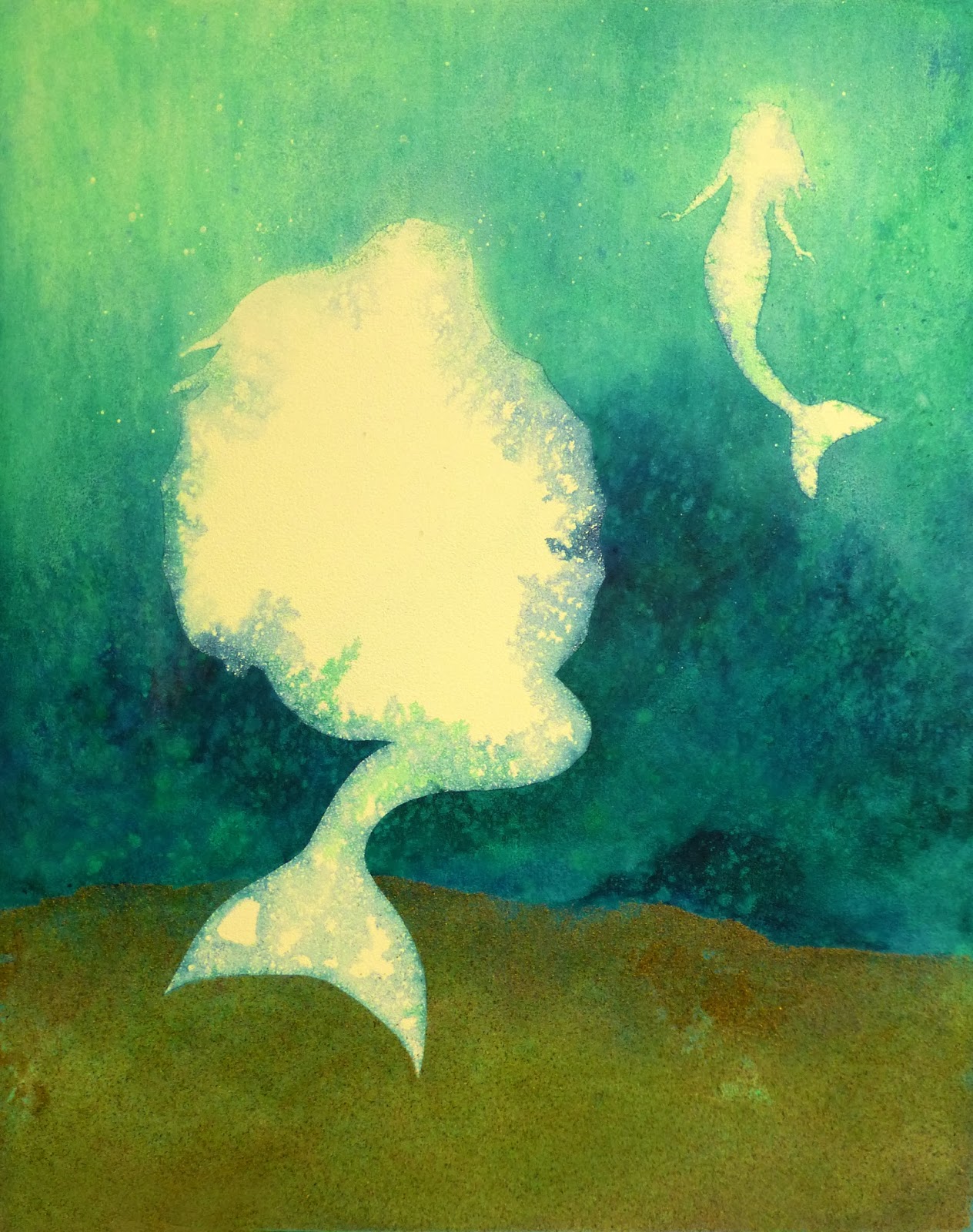 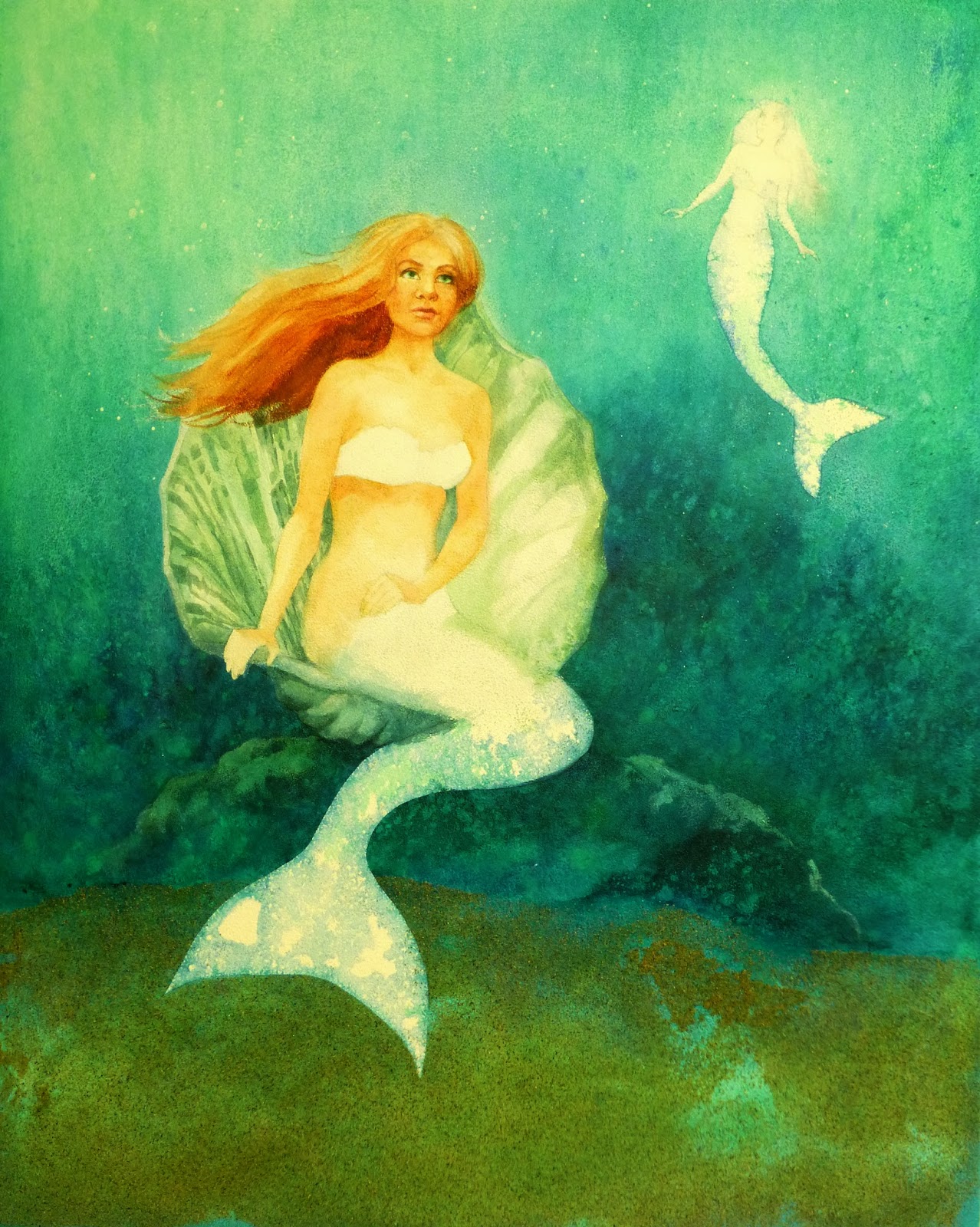 Once I began painting the featured mermaid I realised that the rock upon which her shell sits was too short, indicating that adding the sand, when I did, was premature! I was able to scrape off the desired amount of sand and repair the area with more painting.

From purchased, hand made, reptile paper which was a textured, solid, royal blue I cut the tails (and the bras). It tinted easily and nicely with the thalo colours, a little dioxazine purple and Daniel Smith's duochrome mauve. Interesting how the paper curled when I made it wet - thankfully curling in a convex fashion. To me, this enhanced the look.   ﻿
﻿ 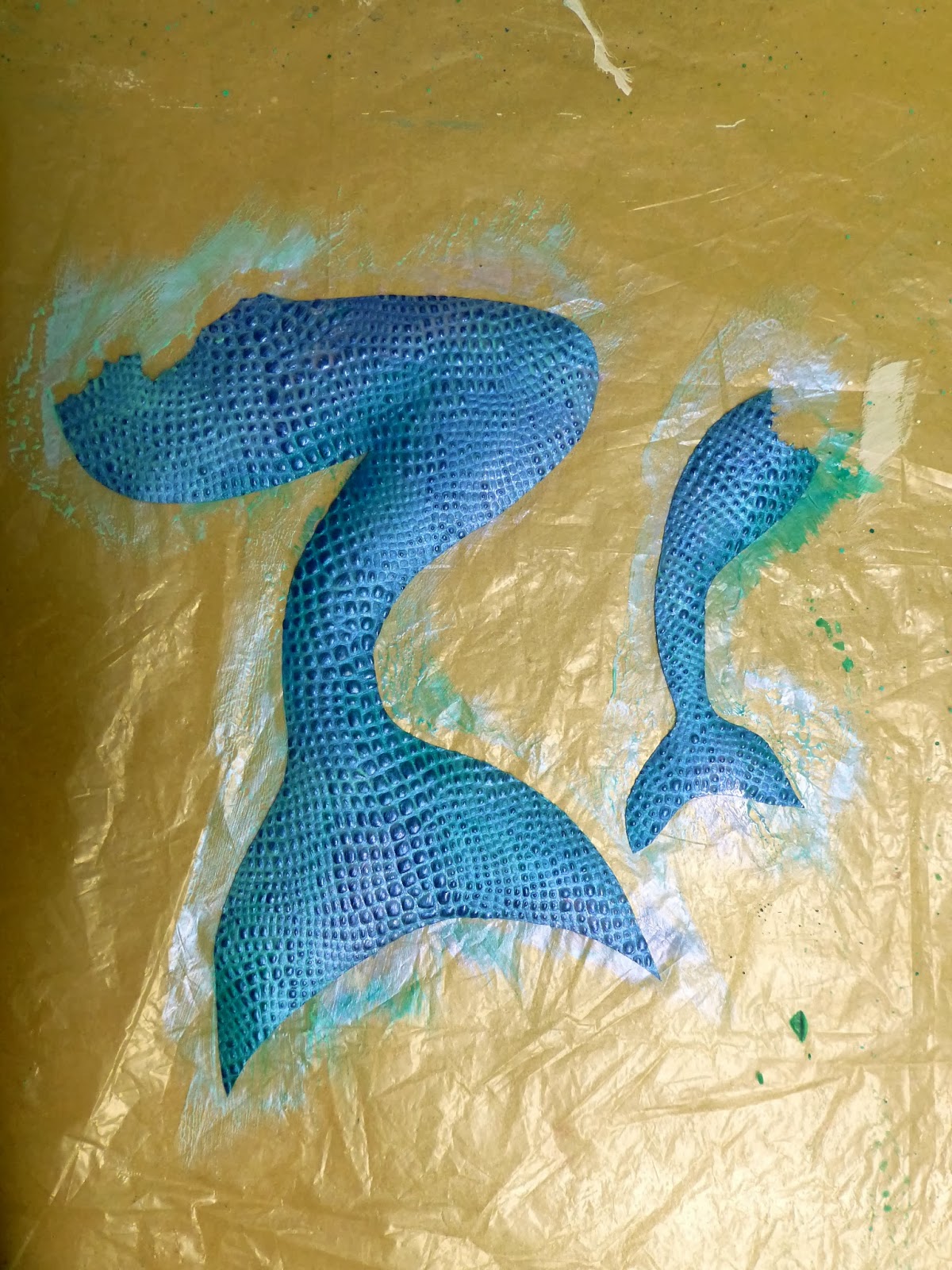 The seahorse, black and turquoise coral were stamped on with commercial, rubber stamps. The dolphins are hand painted. The two dimensional shells are cut-out photocopied photos tinted with the blue and green thalo colours. Their shadows are painted onto the sand. I added more sand plus collected and purchased real shells. Using Sculpey, I built the starfish first by making a mould of one I bought in Hawaii (which was too orange for this painting). Using the mould I made a white starfish which I coloured the shades I needed it to be.

I have a feeling you're going to want to see what MERMAID ONE looked like.

Recently our daughter, Laura, achieved her yoga teacher training certificate. Knowing she likes to keep notes on her yogic journey I purchased a ready-made, lined journal (because I couldn't find any craft covered journals) to alter for her birthday ...

﻿
﻿
Now that it has been gifted I can describe the trials and joys of creating this journal! Not wanting to change the back of it, I opted to go with its colour scheme. On the front, I masked off a border and covered the centre area with white gesso ...

On the gessoed area I created texture using a cell stencil. Once dry, I painted it to match the colours of the back.
﻿

When I peeled away the frog tape (masking the border) the textured panel lifted too! In pieces! Had it come off intact, in one large piece, I'd have been able to secure it back down - once the original surface had been sanded that is. I hadn't thought to sand first and without sanding there is no tooth for adhesion.

﻿
After I had coloured it, I felt the cell stencil pattern was too busy, too dense. Having to begin again gave me the opportunity to change stencils.

The embellishments were a wild array of materials in different colours, none of which (except some of the tiny roses) were right for the journal. When it comes to colouring anything - metal, plastic, wood - alcohol inks work magically! All these trinkets could not be adhered at once. It took a lot of heavy gel gloss medium, slowly building multiple layers (with plenty of drying time between them) to secure them all down.

The idea for Laura's journal was inspired by this one ...

Posted by Alice Saltiel-Marshall at 11:17 AM No comments: