June 2nd we caught yet another VIA Rail train from Ottawa to Montreal followed by a metro ride to Longueuil, on the south shore, where cousin Claudine, her husband Sebastien were living with their daughter Ericka. We spent several lovely days with this accommodating, fun loving bunch of cool relatives. Laura and I had stayed with them on our mother/daughter trip to Montreal and Quebec the month before she married Adam in August, 2010. I was so pleased to return with Bill this time because, since this visit, the Cicchillitti's have sold their suburban home in favour of a duplex in the old village of Longueuil.

On my mother's side of the family the scales are tipped the opposite way to how it is with my agnate side. In this case I'm the elder cousin. Aunt Loretta is six years younger than my mother and was fourteen years old when I was born. I was fourteen when Loretta had her first child, Claudine. When Bill and I married, Claudine was seven. In essence, I had no cousins of playable age when I was growing up, but now, well now it's different.

When Sebastien married Claudine he adopted her sons, Adam and Nick. They are a tightly knit unit who care deeply for one another. Being with this family makes me feel as though I've come home. They are intelligent, engaging, artistic and enjoy life to the fullest.

While we were there, Claudine and Sebastien celebrated their 25th wedding anniversary so I presented them with a painting ...

I first visited Montreal during Expo 1967, when I was almost nineteen, but I spent most of my time at the wondrous spectacle that it was without really exploring the city. In the two trips, of this past decade, I feel that we have only scratched its surface.


On June 7th we bid the LeBlanc/Cicchillitti family goodbye pretending that was the last we would see of them this trip. We may have fooled Sebastien (the kids knew otherwise) but no one can fool Claudine who was not at all surprised to find us at their wedding anniversary celebration, June 11th!

We departed Montreal for home the day following the celebration but there is still one last instalment of the trip left to be told. It's not officially part of The Friendship Tour as it didn't involve seaking out anyone. Our solo run away to Quebec City is up next.

On May 29th we took another VIA Rail train from Toronto to Ottawa. Neither Bill nor I had been there since were were kids and clearly we were overdue for a visit to our nation's capital. Cousin Virginia Saltiel-Adams (youngest daughter of my father's eldest brother) lives at Bancroft, Ontario a three hour drive from Ottawa. I have a close relationship with Virginia now that wasn't really possible when we were young because of the age difference. She was raising her own family when I was still playing with dolls. We were delighted when she said that she'd come and spend a couple of nights, at our same hotel, enabling us to spend a few days together.


Just inside the main entrance to The Centre Block, under the Peace Tower, is Confederation Hall (or the Rotunda) with the Hall of Honour beyond that takes you to the Library of Parliament.

The House of Commons was in session over the days that we were in Ottawa and I hoped to catch a glimpse of Justin Trudeau. As Canadian citizens we are permitted to sit in the gallery of the House of Commons to observe and listen. Trudeau was not present during the hour we chose to do that. It was May 31st and assisted dying was being debated. I confess to finding it rather tedious listening to politicians pontificating. The discussions just seemed to go around and around without really going anywhere. As we were leaving, there was a great crowd of people in the Hall of Honour and I spied Trudeau in it. He was engaging a group of students. When he came close to us, in the Rotunda, he and the kids looked up to the press in the balcony above. I was so pleased to be able to take this photo. I did have to zoom in to get it, but I could have reached out to touch him as he walked by leaving the building - but I didn't for fear of getting arrested!


According to the tour guide on Lady Dive, in preparation for Canada's 150th birthday, this year, the capital was undergoing some 39 revitalization or construction projects. Everywhere you looked you would see at east two cranes piercing the sky. The National War Memorial in Confederation Square was off limits completely ...

And then there was the long anticipated, first ever visit to The National Gallery ...


Knowing there would be two visits, Bill begged off the first but Virginia accompanied me on both.

J.E.H. MacDonald is another Group of Seven favourite and I adore his Tangled Garden oil ...


Grandson of my mother's sister, Loretta, and son of cousin Claudine and Sebastien is Adam Cicchillitti which makes him my second-cousin-once-removed. He is one of the finest classical guitarists I have ever heard. He teaches guitar to children in the Montessori system and lives in Ottawa with his lovely wife, Virginie. It was terrific that he could steal an hour from his busy day to join Bill and me for lunch at the Byward Market.


There's an fascinating tour on land and in the waters of the Ottawa River, called LADY DIVE  that we simply had to take ...

Leaving Ottawa we concluded part three of the Friendship Tour by stopping to spend a night with Terry, and her husband James, who live at Dunvegan some 45 minutes south of the city. They have an amazing home at this rural, crossroads community. The house below, on their property, was one they always thought they would restore but didn't.


In October, 1968 I answered an ad which Terry had placed in the Toronto Star which read something like this: "Active single woman seeking roommate two share apartment. Please call before 6pm." The last few words had me wondering if she was an exotic dancer. Turns out she was a nurse at Sick Children's Hospital on the evening shift that week. Her apartment was on the main floor at the back of 650 Parliament Street and it looked out onto the pool. Then, Toronto's St. James Town was a brand new development of high rise apartments catering to the young working set. Sadly, today it's a densely populated ghetto. 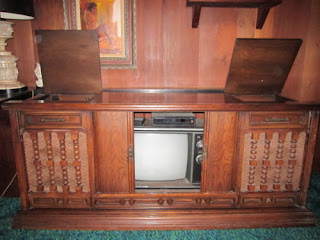 Terry interviewed a few potential roommate candidates. Athough I was five years her junior (she was 25) I was chosen because I owned a sofa bed and a Marconi TV/stereo console similar to the one on the left. We adopted an unconventional way to deal with the sleeping arrangements ... whoever went to be first got the bedroom, hey it worked for us!

The night I moved in, Terry's boyfriend and one of his roommates, Bill, came to pick her up, and so we consider Terry responsible for introducing us - and we're most grateful.


Above is yours truly at Terry's dining room table with the pastel drawing I gave to her when we moved out of the apartment. She later told me how she regretted passing it on to a friend and so, in 2013 when she turned seventy, I gifted her with this oil as a replacement ...

By the time the apartment lease was up at the end of August 1969, both Terry and I had made other plans. I married Bill and she moved to Montreal. We stayed in touch for a few years before loosing track of one another. Over time I tried to find her but all I was able to learn was that she had married, changed her name, moved to Nova Scotia and had a daughter. Meanwhile we had moved to Alberta. When computers and the Internet were common place at home I tried again, this time with success. We were reunited in the late 1990s.

I've truly gone off on a wild memory lane tangent here - but you see it's all a part of my story.

Posted by Alice Saltiel-Marshall at 11:49 AM 4 comments: