Cypress Hills and the Medalta Museum 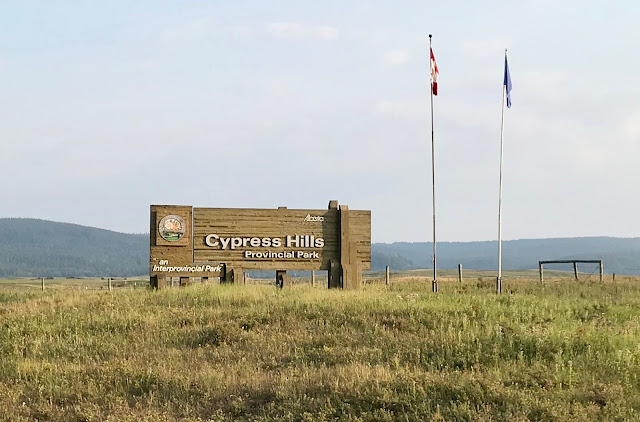 For the week of August 13th to 17th we had our granddaughter, Avery, stay with us. With her parents, we arranged that Cypress Hills Interprovincial Park was where we would return Avery to them. As we live in Canmore and they in Saskatoon, Cypress certainly isn't halfway for either party but it's a great place to meet for a weekend of camping.


That first night Avery slept in the trailer with us. Her parents pitched their tent in the dark. It was adorable to see Avery do what she said she was going to do - crawl into the tent with her folks just as soon as she woke up in the morning. Night two Denise slept with us in the trailer and Avery had a tent experience with her Dad. Musical beds, in our family, is not unusual.


When we arrived, Friday afternoon, it was almost 30º celsius but from then on the daily highs were a cool 18º - 20º. Much too cold to play in Elkwater Lake. I was surprised to learn that the elevation of Cypress Hills is about the same as Banff ... around 1400 meters (4600 feet). That explains the sudden temperature change. Much to Avery's disappointment, there was no swimming while we were there.

The Scammells had to head home on Sunday. Wanting to check out more of the park we followed them almost to the Saskatchewan border. We overshot the road to Reesor Lake so we had to consult the map, which was certainly not to scale, so we blame it for getting Lost in Cypress Hills ...

Bill and I stayed on a further two nights at Cypress Hills. We wanted to check out Medicine Hat and, in particular, the Medalta Museum. What a fascinating place. Exquisitely done.


Twenty-one different stations from raw clay storage bins to the glaze pump are in the old factory seen as they were found after the building was abandoned, vandalized, pillaged and excavated. The company closed the factory in 1954 and while there were a few attempts made to revive the site for commercial use, it wasn't until the 1970s that a campaign was launched to preserve it for its historical value. Now, the Historic Clay District is a National Historic Site, including the sprawling Medalta complex restored as a museum, incorporating a working pottery area and a ceramic studio residency program.


The Medalta ceramic crock pots were all I knew of Medalta, but they made so much more ... 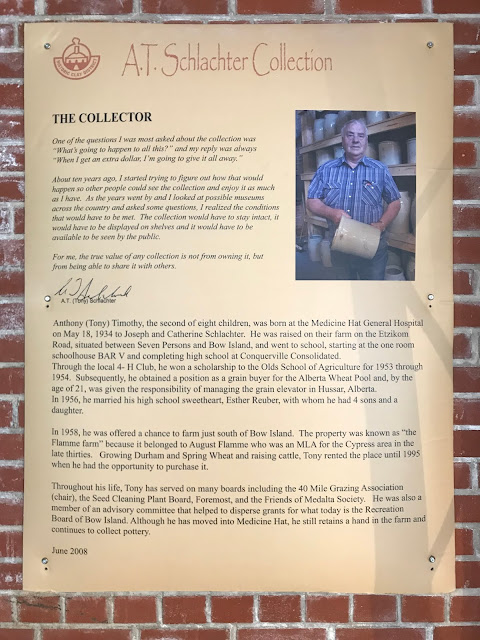 In today's working ceramic studio replicas of Medalta pieces are made and, of course, they are available for sale in the gift shop.

Lisa knew so much bout the history of Medalta and answered my many questions. She told me things about the destruction after the factory's closure that I can't find online. Suffice to say there was extensive damage. I was pleased to learn about the resurrection and work done to the abandoned, derelict buildings.

Bill and I highly recommend a visit to this world class museum!

Posted by Alice Saltiel-Marshall at 6:38 PM 6 comments: Links to this post