... is four weeks old today. Now I have two, but they don't match. The surgery for my first replaced hip (right) was on January 17th, 2014, by Dr. Malcom Chang in Lethbridge. That one is steel. The left hip, replaced by Dr. Jim MacKenzie in Calgary on October 17th, 2017, is titanium. I am healing well and will have a follow-up appointment with the surgeon on December 6th.


In my last medical blog post I told you how my left leg went totally lame and the pain of that hip went completely off the charts. This put me in the Canmore hospital for five nights (August 20th to 25th) while the appropriate dosage of morphine was established. It certainly helped but by no means eliminated the pain. It did not permit me to bear weight on that leg forcing us to buy a walker the day I was discharged simply because I couldn't walk without one.

The three month wait for my consult with Dr. MacKenzie, ended September 6th. He deemed me an urgent case. I was so grateful to have been fast tracked, jumping his usual year long waiting list to be given a surgery date of October 17th.

Our friends, Dave and Cathy, hosted a delightful dinner party for me on my 69th birthday. Dave's son is a paraplegic and they have an outdoor lift for his wheelchair which made entering their home really easy for me. Stairs posed a terrible problem for me during this stage. I'd go up and down indoor steps on my butt.

The pressure of needing to paint birthday paintings for our three grandchildren saw me finally take up the brushes. At the end of September I started my first painting of 2017, for grandson Everett, who turned two on September 18th. As it hasn't been received yet I've obliterated it in the photo. I laboured over a second painting for his sister, Amira, who will be six on December 9th. The paintings plus the young family's Christmas and birthday gifts began their journey October 19th via a slow boat to Manila. When the box arrives I can show you those paintings.

On October 5th I had a three month check up at the Tom Baker Cancer Centre when I was told I am in remission. Yahoo, as far as I'm concerned cancer is behind me and I'm on to becoming whole again.

Avery's birthday is October 16th. This year it fell the day before my hip replacement so we went into Calgary that evening to celebrate and then stayed overnight at the Scammell's. I've still got her birthday painting to create. It will be done before this year is out. She knows I'm late (it's happened before) and she's a forgiving child. The evening of her birthday she told me "I'm into dragons and Northern Lights. Just some thoughts for my birthday painting."

As this recent hip replacement was my third major surgery in eleven months I wasn't convinced I'd live through it. The morning of surgery I was hopelessly emotional. I chocked up watching Avery depart for school, and I was in tears as we drove off for the hospital watching Denise and Larry wave us goodbye from their front door. Hardest of all was kissing Bill just before they wheeled me off to the OR.

Just as with the first hip I had a spinal as opposed to a general anesthetic. I so welcomed the sedation and was beyond grateful to wake up in recovery. There are forty beds in the bone and joint unit at Calgary's, four year old, South Health Campus, but I never saw that unit. I spent my two night stay in recovery. It was great to go home on October 19th.

The upper body strength I gained in the two months of using the walker was remarkable ...

The death grip with which I held onto the walker gave me painful callouses on the heels of my hands, especially my right hand ... 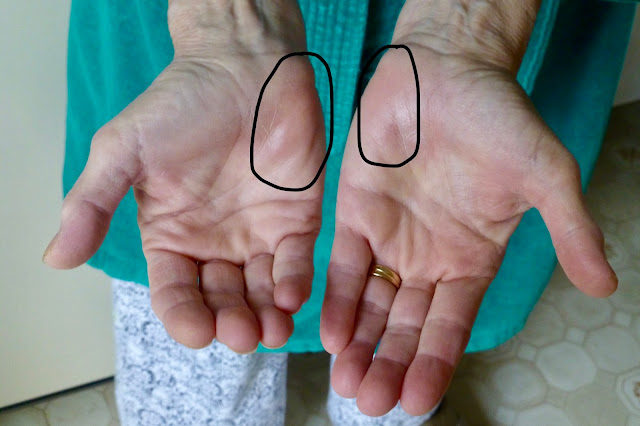 Twenty-three staples, as opposed to thirty-five last time, were removed October 31st by our physician, Dr. Mark Hawkins, here in Canmore. The incision is 5.5" long an inch shorter than the first hip's scar.

Immediately after surgery the wretched arthritic pain was gone, replaced by the pain of having all those muscles carved through but this is a temporary pain and my healing is going well. The phase one, twice daily exercises no longer cause me to wince. Somewhere in the second week I found I could use the cane as opposed to the walker and now I can take some steps without the cane. How wonderful it is to be able to walk again. On a Sunday drive, around Banff, I even managed the teeniest of hikes at the hoodoos ...

There are still some issues to overcome. I'm anemic and have been put on iron supplements. The neuropathy which I previously only felt in my feet had been tolerable but sometime in September it showed up in my hands. The ring finger of my right hand is especially affected. It always feels numb and tingly, and is highly sensitive to heat and cold. The burning sensation of both hands and feet, especially at night, is a plague. No one can predict if this will get better or worse. The cannabis oil that I felt was helping ran out October 26th. In the fray I let my registration/prescription lapse (September 9th) but I'm off to see Dr. Abounaja tomorrow to acquire a new prescription and ultimately further oil from Cannimed in the hopes that it will check the neuropathy.

It's a year ago tomorrow that I had the radical hysterectomy. I was still having discharge. On October 31st, our GP pegged it as yeast and put me on Flagystatin, a suppository antibiotic, for ten days, which cleared that up. As with the other surgeries for six weeks post surgery I'm self-injecting a blood thinner daily (Fragmin this time) to prevent blood clots.

As for weaning myself off morphine. I did not quit cold turkey but rather followed the recommendation of both the surgeon and our GP. On October 19th, I reduced the intake from 60mg every 8 hours to 30. A week later I halved it again and another week later I took the last 15mg tablet at 6am, on November 3rd. Quite simply it has been hell since. I was lucky to have only vomited once. The withdrawal symptoms both physical and mental are extensive. Worst of all is the insomnia. I long for an uninterrupted night's sleep. My dreams are vivid and plentiful. Some are highly entertaining while others frighten me to the point where I wake myself up to escape them.

With further weight loss I'm barely 120 pounds. I've no strength or fitness. The diarrhea (another withdrawal symptom) in a colostomy bag is not for the faint of heart. I'm hoping that my colon can be reconnected to my rectum one day, but right now I have a strong aversion to more surgery.

To end on a happy note, one of the delights of being back in Canmore is seeing just how the art community has blossomed. It's so inspirational to find it even broader than it was a decade ago. On November 11th, I was so pleased to attend Pascale Ouellet's 9th solo show, 'Pretexts' at Elevation Gallery ...

The past year plus has been especially hard on both of us. I could never have survived it without Bill. He does everything and is everything to me. Thanks to family and friends who have been a huge support. I believe we all take the freedom to easily come and go for granted and so I tell you we are truly looking forward to my strength being rebuilt, enabling us to get out more and to resume traveling.

Posted by Alice Saltiel-Marshall at 9:51 AM 8 comments: